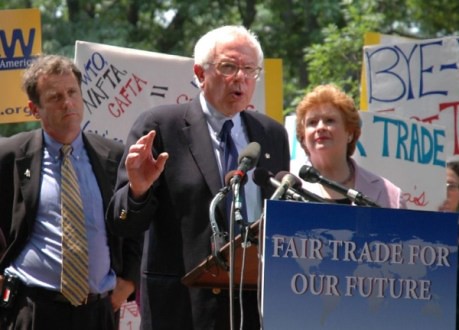 Charlie Pierce on the media bobbleheads’ attack on Bernie Sanders:

Bernie Sanders won’t be president? No kidding, Bob. What was your first freaking clue? But, as I said, here’s the thing. Chris Christie won’t be president, either. Rand Paul won’t be president, either. Nobody’s out there in 2014 reminding their supporters that they’ll have to come to their senses some day. There is nobody telling Martin O’Malley’s supporters that they all should lay in some “READY FOR HILLARY” buttons against that inevitable day when the campaign craters. It is not a disqualifying flaw in a candidate two years before the election that the candidate is unlikely to win — or, even, that the candidate is very unlikely to win — because, if it were, nobody would be qualified to run. This is all understood, if rarely spoken, by the people who judge such things. But, so far, it’s a standard that has been openly applied only to Bernie Sanders. (Jesus, there are reporters out there who still are seriously talking about bringing back Willard Romney.) Why is it that Bernie Sanders is only in this to “push the dialogue to the left,” while Ted Cruz, who is a fking nut six ways to Sunday, is running because he has a “substantial constituency within the party”?

What is going on, I believe, is not an effort to marginalize Sanders but, rather, to marginalize what he’s talking about, because making a presidential election purely about class is something we don’t do any more. It really isn’t funny that Sanders talks incessantly about “the middle class,” because people who perceive themselves as middle class are finding themselves broken and sinking into poverty. Income inequality, and its pernicious effects on our people and our politics and our entire culture, is worth discussing, in detail, in a national election, and if Bernie Sanders wants to be monomaniacal on the subject, so what? Rudy Giuliani got months of great press as a potential president out of what Joe Biden famously called, “A noun, a verb, and 9/11.” Nobody accused Giuliani of running merely to push the conversation to the right, or into drag, or whatever. I’m old enough to remember 1979, when the smart money thought Ronald Reagan a superannuated joke. Right now, the 2016 election is nothing more than a vague national conversation about what’s important. If it’s all the same to everybody, for the moment, I’ll treat Bernie Sanders as a potential president the same way I’d treat Hillary Clinton or any of the others, thanks. It’s fking September of 2014. Nothing else makes sense.

3 thoughts on “Hits the nail on the head”