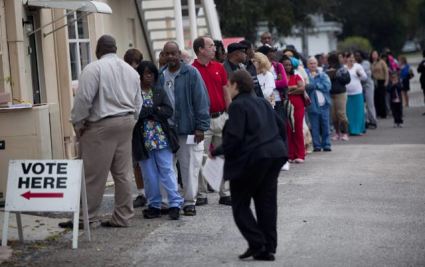 See, this is why we have to pay closer attention to local and state races — because they get to control our voting resources:

Some of the longest lines on Election Day occur at polling places in black and Hispanic neighborhoods. A new report says that’s not a coincidence.

In the three states with the longest lines in 2012, precincts in minority neighborhoods were systematically deprived of the resources they needed to make voting operate smoothly — specifically, voting machines and poll workers, according to the report by the Brennan Center for Justice. The report’s data show the growing need for federal supervision of voting rights, though ensuring supervision is harder than ever since the Supreme Court removed the teeth from the Voting Rights Act of 1965 last year.

The report looked at Maryland, South Carolina and Florida, where many voters waited for hours to cast a vote in the 2012 presidential election. In all three, minority precincts were more likely to have had long lines. In South Carolina, the 10 precincts with the longest waits had more than twice the percentage of black registered voters, on average, than the rest of the state.

There was a clear relationship in those states between the racial makeup of a precinct and the number of voting machines it received from the state or county. In Maryland, the 10 precincts with the lowest number of machines per voter had more than twice the average percentage of Hispanic voters. In South Carolina, the law requires one voting machine per 250 voters, but that requirement is routinely violated in minority areas. Richland County, which is about half black, had a precinct with 432 voters per machine, which contributed to extensive delays.

Florida has no standards for machines or poll workers, but the study found far fewer poll workers in heavily Hispanic areas. That contributed to an average delay in the most populous counties of 53 minutes — a wait that encouraged people to walk away and discouraged them from returning in the future.

One thought on “Voting lines”