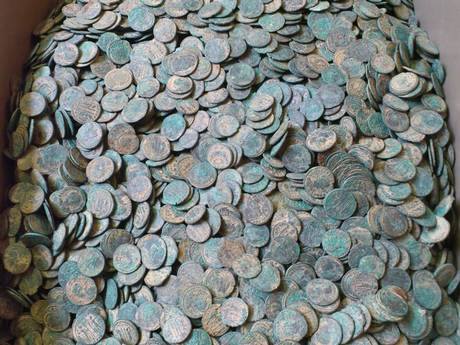 I do so love this stuff:

EAST DEVON, ENGLAND—Archaeologists and conservators from the British Museum have announced that an amateur metal detectorist has found one of the largest hoards of coins ever discovered in Britain. The hoard is comprised of no less than 22,000 coins dating to between A.D. 260 and 350 that were in very good condition when they emerged from the ground, Devon County Council archaeologist Bill Horner told The Independent. Since the hoard was found ten months ago—its discovery was kept quiet to avoid looting at the site while archaeologists conducted a proper excavation—the coins have been cleaned, identified, and catalogued. Many bear portraits of the family of the emperor Constantine and of the emperor himself. The Seaton Down Hoard, as it is now called, is thought to be the fifth largest find of Roman coins in Britain and one of the largest in the whole of the Roman Empire.