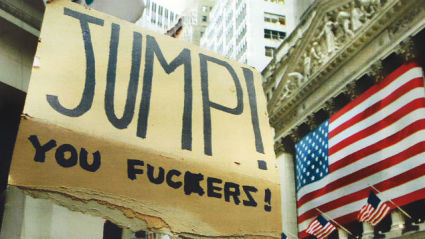 They not only want to rob us blind, they want us to think highly of them for doing it:

The nation’s largest banks and debt collectors are worried that if you learn what people are saying about them, you might like them less. And that wouldn’t be fair, they say.

The financial sector is fighting a Consumer Financial Protection Bureau proposal that would have the agency publish complaints submitted by people who feel they have been mistreated by a lender, debt collector or other financial institution. As it now stands, the agency publishes some small amount of information about the more than 290,000 complaints it has received from aggrieved consumers, but has refused to release the full narratives — essentially, the details.

Under the new policy, consumer names would be redacted and banks and other financial institutions would have a chance to publicly respond to or refute any allegations. People who file a complaint would have to opt in to having their narrative published on the CFPB’s website.

“This is what consumers want,” said Susan Grant, the director of consumer protection at the Consumer Federation of America, a nonprofit. “It gives them better ability to make decisions about what financial institution to choose.”

Yet the banks and other financial groups opposing disclosure argue that the CFPB approach would unleash a dangerous flood of misinformation that might promote the faulty sense that somehow they are not good corporate citizens. Consumers would also be confused by all the un-vetted information, they assert.

The Financial Services Roundtable, a trade group that represents the banking industry, has gone so far as to set up an entire website to fight the CFPB’s proposal, called “CFPB rumors.”