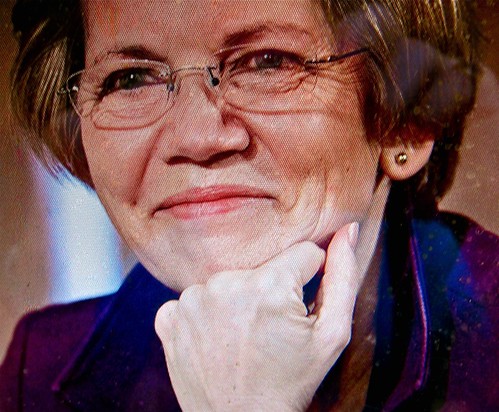 That’s right. Regulatory capture, this is an old problem. I was writing about it, obviously, in the Bush days. But President Obama had a golden opportunity when he came in to change the system and I just don’t feel like it has changed, the Consumer Financial Protection Bureau aside. I mean, are the regulators now referring things to the Justice Department? Are the wheels turning again?

There has not been nearly enough change. Not nearly enough. The consumer agency — this is why I argued for it — the consumer agency is structural change. So basically, the premise behind it was that there were plenty of federal laws out there, but no agency would step up and enforce them. And the responsibilities of these laws were scattered among seven different agencies and not one of those agencies saw its principal job as looking out for American families. So the OCC [Office of the Comptroller of the Currency] was all about bank profitability, the Fed was all about monetary policy. Everybody had something that they were about, but consumer protection was everybody’s job and therefore nobody’s job. You know, it was down seventh, or tenth or hundredth on the list and they never got to it, even as the big financial institutions were selling mortgages that should have been described as grenades with the pins pulled out. Really! My whole thing about toasters—remember, that was based on fact. At the time I wrotethat piece on it, that was before the crash, one in five mortgages that were being marketed by the biggest financial institutions were exploding and costing people their homes. No one would permit toasters to be sold when one in five exploded and burned down somebody’s house. But they were selling mortgages like that and every regulator knew about it.

And those people who had it blow up in their faces, those are the ones we’re prosecuting.

Oh God. So exactly right. Well, to the extent we do [prosecute] anyone. But that’s exactly right. And so the idea behind the consumer agency was to say: structural change. We need an agency that has one and only one goal, and that is to look out for American families. To level the playing field, to make sure that people are not getting tricked and trapped on these financial instruments. And so it was a big shift, and it’s a shift worth thinking about. We took away — Dodd-Frank took away — all this responsibility that had nominally been spread among the other agencies, concentrated it in one agency, and now holds that agency accountable. So you give the agency the tools and then hold them accountable. The reason I think that story is so important is because it is structural. It’s not just a question of, “Gee, get good people and somehow things will work better.” There are structural changes we have to make. . . . The idea, the question that haunted me at the agency was: How do we make sure the agency is true to its mission, not just today with the people that we hire in the first plume of excitement, but 30 years from now, 40 years from now, 50 years from now…

One thought on “Elizabeth Warren interview”