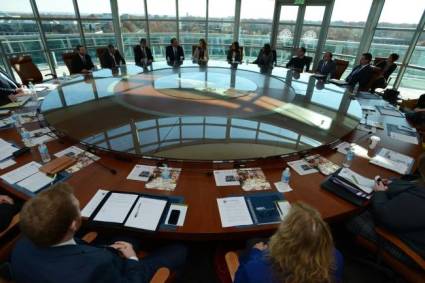 This is really insane. I mean, really, really, insane:

It costs more than $44,000 in tuition to attend Kean University for four years, and many of the school’s students struggle to pay the bill.

But the taxpayer-supported school in the township of Union spent $219,000 so far and has authorized up to $270,000 — about the average price of a house in the nearby working-class neighborhood — for a custom-made, circular conference table that seats 23 and features data ports, microphones and an illuminated map of the world in a glass panel at its center.

The table was bought without competitive bidding, which is normally required under New Jersey law for purchases at state colleges and universities. Instead, Kean hired a company in China to manufacture the table. The school recently established a branch campus there and wants to strengthen ties with the Chinese government.

The price tag is as much as 10 times what has been spent by other schools for similar tables, records show.

Kean President Dawood Farahi, who has grand ambitions for the university, including expansion of the China campus, said the school saved money by going to China and that the table would have cost half a million dollars if made in the United States.

“It is small-minded to focus on the university buying a $200,000 table,” Farahi said in a recent interview on campus.

“Why not?” he responded when asked about the purchase. “Why not? Why not?”

One thought on “The table of public trust”