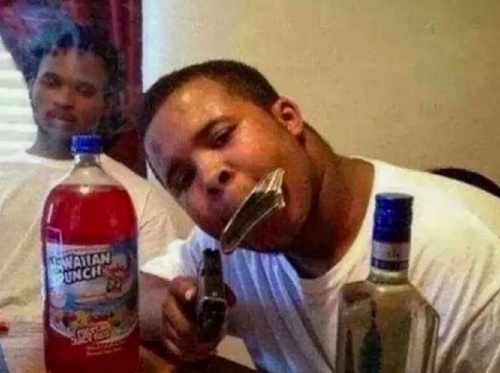 You may have seen it on your friends’ Facebook feeds, with comments ranging from “thug” to “piece of shit.”

It is not Mike Brown.

Although the picture displayed above continued to circulate on sites like Facebook and Twitter after August
2014, it had been exposed as inaccurate almost immediately after it began spreading. The circulation of the photo was traced back to Kansas City, Missouri, officer Marc Catron, who posted the photograph to Facebook in August 2014 and stated, “I’m sure young Michael Brown is innocent and just misunderstood. I’m sure he is a pillar of the Ferguson community.”

The photograph was not one of Michael Brown, but of Joda Cain, a young man who was arrested and charged in Oregon with a murder unrelated to any of the events in Ferguson. It’s not clear whether Catron mistook Cain for Brown or whether the misidentification was deliberate.

Immediately after Catron posted the image of Joda Cain to Facebook with the claim that the photo was of Mike Brown, a local CBS affiliate reported Catron’s actions were under “internal review.” It’s unknown whether Catron faced any disciplinary action as a result, but the officer removed his Facebook page at the time of the initial controversy back in August 2014.

If you see it anywhere, please comment with this information. Don’t let this lie go unanswered.

2 thoughts on “This is not a picture of Mike Brown”