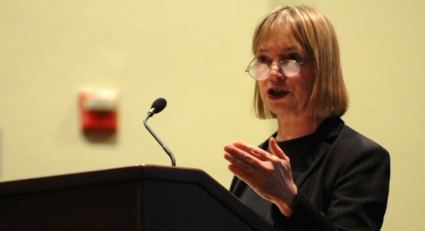 Dumb thing to do. She should have said “despise” instead! What synonyms do you suggest?

“I hate Republicans,” Ms. Douglas wrote for the nonprofit magazine In These Times. “I can’t stand the thought of having to spend the next two years watching Mitch McConnell, John Boehner, Ted Cruz, Darrell Issa or any of the legions of other blowhards denying climate change, thwarting immigration reform or championing fetal ‘personhood.’ “

She then accused conservatives of having “certain psychological characteristics,” such as “[d]ogmatism, rigidity and intolerance  of ambiguity; a need to avoid uncertainty; support for authoritarianism; a heightened sense of threat from others; and a personal need for structure.”

“According to researchers, the two core dimensions of conservative thought are resistance to change and support for inequality,” Ms. Douglas continued. “These, in turn, are core elements of social intolerance. The need for certainty, the need to manage fear of social change, lead to black-and-white thinking and an embrace of stereotypes.”

The column sparked outrage among conservative and free-speech groups on campus.

What’s the problem? She was just exercising her right to free speech, right?

“This is blatant intolerance, and the university should take action on the behalf of intellectual diversity and all of the students who are intimidated into silence,” Mr. Strobl said.