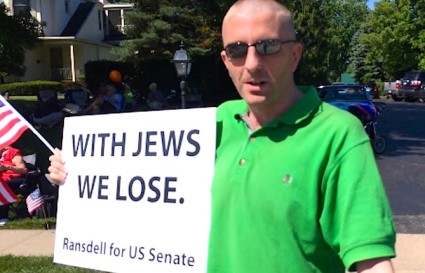 Although I imagine it’s a lot easier than it used to be!

Robert Ransdell, the neo-Nazi who ran for U.S. Senate in Kentucky last year under the slogan “With Jews We Lose” – he didn’t win, by the way – was arrested in the Blue Grass State as he prepared to protest a Martin Luther King Jr. Day event in the small city of Florence.

Ransdell, who was carrying a sign that read, “Happy Machin’ Lootin’ Killin’ Day,” was taken away by police on Monday shortly before the event was scheduled to begin at 3 p.m., a spokesman for the Florence Police Department told Hatwatch today. Ransdell was charged with trespassing in a city owned government building.

“I feel depressed at the fact that I was arrested,” Ransdell told the neo-Nazi website, The Daily Stormer. “I have been able to walk that line over the years and it is something I have taken pride in, getting out there balls to the wall and at the same time not being shackled for doing so.”

Ransdell said he was arrested after police – “agents of the Jew-Negro Occupation government,” according to the website – asked him to leave the building and he refused. “It was just the record of token harassment I have got from this city in particular for my political activity in the past,” he said, “that moved me to just refuse to be bullied around anymore.”

2 thoughts on “It’s not easy being a neo-Nazi”