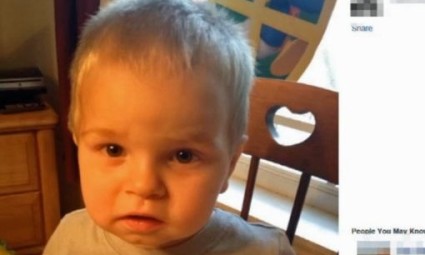 A trip to the moon on gossamer wings? No, yet another responsible gun owner whose loaded weapon is inexplicably commandeered by a small child who mysteriously ends up dead!

A two-year-old Florida boy died on Wednesday after accidentally shooting himself with his father’s .380 caliber handgun that he found in the family car.

The toddler, Kaleb Ahles, climbed into the front seat of the family’s vehicle while his parents carried boxes to move out of their home in Tarpon Springs, located about 30 miles north-west of Tampa.

Kaleb, alone in the car, crawled across the seat and found the gun that was stored in the glove compartment, sheriff Bob Gualtieri of the Pinellas County sheriff’s office said during a Wednesday evening press conference.

Kaleb then grabbed the gun, turned the barrel toward his chest, and squeezed the trigger, Gualtieri said.

His parents heard a loud “pop” and ran toward the car, deputies said. His mother, Christina Nigro, immediately began CPR while another family member who was there to help with the move called 911.

“It’s just one of those things that happens where everything lined up the wrong way, where we had a two-and-a-half year old that was able to take a gun, pick it up turn it around and he shot himself dead center in the middle of the chest,” Gualtieri said.

Yeah, like that Kansas City five-year-old who just shot and killed his nine-month-old brother:

Ms Widerhol told NBC she had no idea the gun was in the house.

“I didn’t know it was there until I turned around and saw it laying on the bed,” she said.

“I don’t know why someone would have a loaded gun in the house while kids were around.”

Ms Widerhol’s father, William Porter, said he has always kept the gun in his room.

“I told the boys they weren’t supposed to be in my bedroom where I keep the gun cabinet and they knew it — but like I said, boys will be boys,” he told NBC.

Police said there is no reason to believe the shooting was anything other than an accident.

“We are big supporters of firearms around here,” Sheriff White told KETV in the US.

“We have a lot of people that own weapons… Most people are very safe with them, and this is one of those cases where everything went together in the wrong way.”

Yes, everything goes wrong. Why, it’s almost as if people recklessly endangered children with gun carelessness. If only there was a law that addressed it. Oh, wait.

2 thoughts on “‘Just one of those things’”