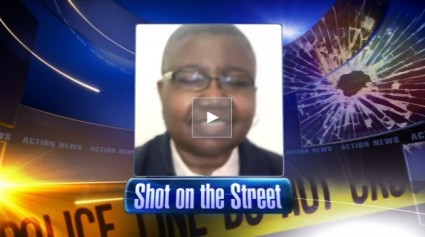 Remember when I asked for donations of duffel bags and suitcases for foster kids? The woman I worked with to set it up was Kim Jones, the victim in this seemingly random shooting death several weeks ago. It had me really depressed, I didn’t want to talk about it. But I feel a lot better now that they got the guy who did it:

PHILADELPHIA (AP) — An assistant director at a child advocacy organization followed and shot his supervisor as she waited at a bus stop so she couldn’t report him for stealing about $40,000 from the organization, police said Monday.

After the slaying last month, Randolph Sanders told a television station that he was “stunned” by the death of 56-year-old Kim Jones, a mother of two.

“She was incredibly happy,” Sanders said in the interview with WPVI-TV in Philadelphia. “So this is – this is just disturbing.”

But over the weekend, authorities say, he confessed to shooting Jones once in the back of the head in what homicide Capt. James Clark described as “a premeditated assassination-style” killing.

One of the things that depressed me was how many people insisted to me the cops would never bother trying to find the shooter, because the victim was black and it happened in North Philly. I knew that wasn’t true — if there’s anything that gets cops motivated, it’s finding the killer of someone they think of as a “citizen” (as opposed to a scumbag). And social worker Kim was a solid citizen. Heck, she was even standing at the bus stop listening to gospel music on her headphones when she was shot.

Clark said detectives worked around the clock for two weeks reviewing hundreds of hours of surveillance video. They were able to track the suspect from the bus stop to a vehicle 3 miles away and got their break when they discovered Sanders drove the same kind of vehicle, Clark said. They brought him in for questioning Saturday, and that’s when he confessed, authorities said.

“This is the type of investigation that leaves you both angry and confounded,” Deputy Commissioner Richard Ross said. “It just breaks your heart.”

I’m so glad they caught the guy. And I hope a more few people understand that cops aren’t quite as uncaring as you might think.

One thought on “They got him”