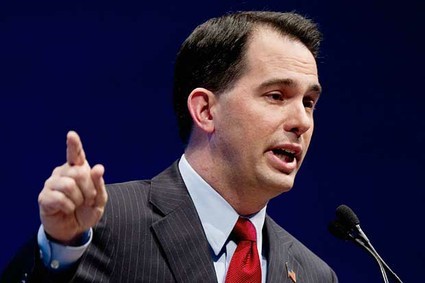 Could he be any more of a shill?

This article originally appeared in the Huffington Post and is republished here as part of the Climate Desk collaboration.

Page 449 of the budget proposal includes a recommendation from the governor “directing the commission to conduct a study on wind energy system-related health issues.” The request states that a report should be submitted to the governor and legislature within a year after the budget goes into effect.

“The request for a Wind Energy Health Issues Study was included with the intent to provide the Public Service Commission with comprehensive information to consider as they receive requests for future wind energy projects,” said Laurel Patrick, Walker’s press secretary, in a statement to The Huffington Post.

Wind power in the state has been the subject of some public debate, drawing campaigns paid for by conservative groups with ties to fossil fuel interests on one side and by renewable energy advocates on the other.

Last October, health officials in Brown County declared that eight turbines located at the Shirley Wind Farm posed a health hazard to residents. The chairwoman of the local board of health cited “ear pain, ear pressure, headaches, nausea” and “sleep deprivation” as symptoms among nearby residents. Local reports suggest Brown is the first county in the country to reach such a conclusion.

The conservative Heartland Institute, which advocates for “free-market solutions,”has touted the Brown County decision, and used it as an opportunity to criticize the state for “imposing its wind power mandates.” Heartland has received funding in the past from fossil fuel interests. Walker has appeared as a guest speaker at the group’s events.

Previous studies have found no link between wind farms and increased health problems. The Wisconsin Wind Siting Council, an advisory group to the state’s public service commission, issued a report to the state legislature last fall that concluded that “some individuals residing in close proximity to wind turbines perceive audible noise and find it annoying,” but “it appears that this group is in the minority and that most individuals do not experience annoyance, stress, or perceived adverse health effects due to the operation of wind turbines.”

3 thoughts on “Scott Walker is a Kochsucker”