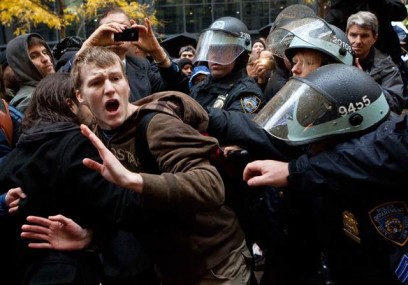 I wonder when people are going to fix this:

The NYPD wants to take away your right to vote if you don’t obey them. It sounds extreme, but the recent push from the New York City Police Department to reclassify “resisting arrest” as a felony amounts to just that.

On Wednesday, NYPD Commissioner Bill Bratton had the audacity to urge state legislators to increasing the penalty for resisting arrest from a misdemeanor to a felony.

He argued that this is necessary, because New Yorkers need to be reeducated so they can “get around this idea that you can resist arrest. You can’t.”

But police routinely slap the “resisting arrest” charge on anyone and everyone they don’t like. Some of our reporters have documented this at an array of protests we have covered. The Beavercreek, Ohio police even backed a police SUV cruiser into an elderly woman and then brutally twisted her arm, bent her over a second cruiser and continuously yelled “stop resisting” like a mantra, even though dozens were witnessing and filming the compliant woman who never once offered the least bit of resistance to the officers.

“There’s a widespread pattern in American policing where resisting arrest charges are used to sort of cover – and that phrase is used – the officer’s use of force,” said Walker, the accountability expert from the University of Nebraska. “Why did the officer use force? Well, the person was resisting arrest.”

Reclassifying resisting arrest as a felony would mean depriving those convicted of this charge of the right to vote.

The United States is one of the strictest nations in the world when it comes to denying voting rights to those who have felony convictions. Nearly 6 million people in the United States have been denied the right to vote in some of the most recent elections, due to felony disenfranchisement. That means if you have too much of a certain leaf in your possession, you can’t vote any longer. If you bounce a check for $501 then you can’t vote any longer. But bounce one for $499 and you’re good, you can still vote. Now, if you are slapped with the dubious “resisting arrest” charge – which is often about as vague and undefinable as the charge of “disorderly conduct,” then the NYPD would also see you stripped of your right to vote.

3 thoughts on “Land of the free”