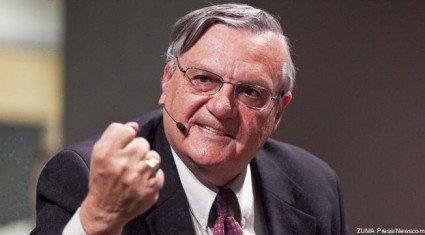 A federal judge says he will not consider calling off an upcoming criminal contempt hearing against Maricopa County Sheriff Joe Arpaio and his top deputies for failure to comply with court orders unless a settlement is reached and he’s confident Arpaio will pay money out of his own pocket.

“Let me make this clear, the schedule remains the same,” U.S. District Court Judge G. Murray Snow said Friday afternoon before ending a status conference. “If there is a settlement, let me know.” The orders resulted from a 2007 class-action civil-rights case that alleges the Sheriff’s Office’s immigration sweeps amounted to discriminatory policing against Latinos. The hearing was scheduled before Arpaio, and Chief Deputy Jerry Sheridan consented to a civil contempt finding in a court filing earlier this week.

[…] Arpaio’s attorneys have proposed he issue a public, videotaped statement admitting guilt, a gesture his critics have sought, unsuccessfully, for years. Snow said Friday that he’d want Arpaio to do that in court and an additional unspecified place. Arpaio would also ask the county to set up an initial $350,000 to serve as a compensation fund for confirmed victims and would “seek to adjust this figure” should it not cover all of the claims. Snow also questioned whether that money would come from Arpaio’s budget or from taxpayers. And he expressed concern about whether all victims could be identified and on setting a limit on the amount of money needed to compensate all victims.

[…] Arpaio and Sheridan have also volunteered to personally donate $100,000 to a civil-rights organization with a mission of “protecting the constitutional and civil rights of the Hispanic community.” Snow worried whether that money would come from Arpaio’s own pocket or his legal defense fund. He wants Sheridan to pay out of pocket too, but not as much as Arpaio because the judge said Sheridan has acted in good faith.

One thought on “Poor Sheriff Joe”