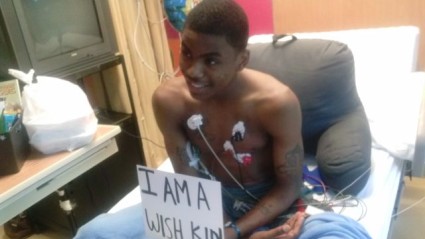 I remember this case. I thought at the time he didn’t sound like a good candidate, but it’s hard to deny someone’s second chance, especially when it’s a kid:

In 2013, then-15-year-old Anthony Stokes was dying and desperately needed a heart transplant that he couldn’t get because, according to doctors, he had “a history of noncompliance.”

Stokes’s family suspected that his low grades and a history of trouble with the law gave doctors reason to believe that he would not be willing to take his medicine or show up at subsequent doctor’s visits. The Georgia teen’s story story sparked outrage, and the hospital quickly reversed its decision, giving him priority on the transplant list.

But two years later, after he received a transplant, Stokes’s “second chance” has come to an abrupt end.

Tuesday afternoon, Stokes died after a stolen vehicle he was driving jumped a curb, hit a pedestrian and collided with a pole in a car chase with police, according to WSBTV.

The pedestrian was hospitalized for her injuries, and Stokes’s car was nearly split in half by the sign, according to the Atlanta Journal-Constitution.

Police said he had to be cut out of the Honda by first responders and rushed to a hospital, where he died around 9:00 p.m.  on Tuesday night.