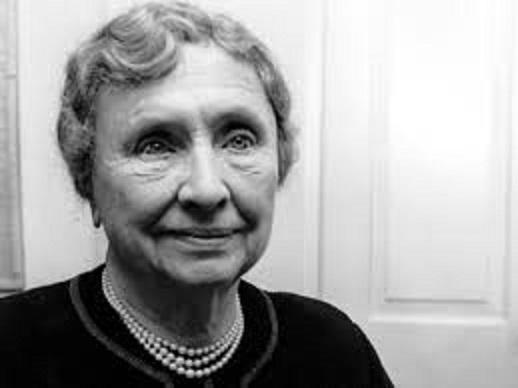 “So long as I confine my activities to social service and the blind, they compliment me extravagantly, calling me ‘arch priestess of the sightless,’ ‘wonder woman,’ and a ‘modern miracle.’ But when it comes to a discussion of poverty, and I maintain that it is the result of wrong economics—that the industrial system under which we live is at the root of much of the physical deafness and blindness in the world—that is a different matter! It is laudable to give aid to the handicapped. Superficial charities make smooth the way of the prosperous; but to advocate that all human beings should have leisure and comfort, the decencies and refinements of life, is a Utopian dream, and one who seriously contemplates its realization indeed must be deaf, dumb, and blind.”

[…] In 1908 Sullivan’s socialist husband, John Macy, encouraged Keller to read H. G. Wells’s New Worlds for Old, which influenced her views about radical change. She soon began to devour Macy’s extensive collection of political books, reading socialist publications (often in German Braille) and Marxist economists. In addition to giving inspirational lectures about blindness, Keller also talked, wrote, and agitated about radical social and political causes, making her class analysis explicit in such books as Social Causes of Blindness (1911), The Unemployed (1911), and The Underprivileged (1931). In 1915, after learning about the Ludlow Massacre—in which John D. Rockefeller’s private army killed coal miners and their wives and children in a labor confrontation in Colorado—Keller denounced him as a “monster of capitalism.”

Although she was universally praised for her courage in the face of her physical disabilities, she now found herself criticized for her political views.

In 1909 Keller joined the Socialist Party, wrote articles in support of its ideas, campaigned for its candidates, and lent her name to help striking workers. Although she was universally praised for her courage in the face of her physical disabilities, she now found herself criticized for her political views. The editor of the Brooklyn Eagleattacked her radical ideas, attributing them to “mistakes sprung out of the manifest limitations of her development.” In her 1912 essay “How I Became a Socialist,” published in the Call, a socialist newspaper, Keller wrote, “At that time, the compliments he paid me were so generous that I blush to remember them. But now that I have come out for socialism he reminds me and the public that I am blind and deaf and especially liable to error.”

One thought on “Helen Keller, radical”