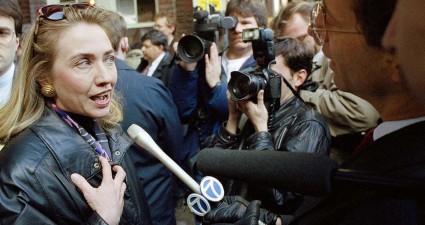 In light of this week’s story about “Clinton Cash,” Digby had a good one in yesterday’s Salon where she points out this is far from the first time the “respectable” media merely regurgitated what they were fed by the right-wing propaganda mills. Let’s take a little stroll down Memory Lane, shall we?

As early as 1994, responsible journalists were questioning the major media’s use of the material provided by the group and its leader, a young man named David Bossie and his partner, a longtime conservative operative named Floyd Brown, known at the time for his role in making the notorious “Willie Horton” ad in the 1988 campaign.

Trudy Lieberman of the Columbia Journalism Review wrote one of the earliest pieces about this Citizens United campaign called “Churning Whitewater”:

ClintonWatch, a newsletter dedicated to “Proving Character Does Count in a President,” is sent to all media and contains tales and tidbits that have found their way into the nation’s news. The organization’s official newsletter, Citizens Agenda, sent to its 11,000 subscribers periodically, offers a morsel or two and boasts about the group’s success in siccing the media on to the Whitewater story. Citizens United’s newest information effort is a Whitewater Fax Bulletin, also called ClintonWatch, which is fed to the media almost daily. “Nobody seems to have all the answers, but by sharing our information with members of the media, we can start putting pieces together … We are making new discoveries every day,” Brown said in launching his new fax service in early March. One of the first Fax Bulletins was aimed at stirring up interest in Lot 7, which Bossie had told me was the next big story.

The March 1994 issue of ClintonWatch characterized the organization’s impact on Whitewater press coverage this way: “We here at ClintonWatch have been working day and night with the major news media to help them get the word out about the Clintons and their questionable dealings in Whitewater and Madison Guaranty.” Of course, Citizens United is not the only source of information on Whitewater. And reputable reporters do their own digging and doublechecking. Still, an examination of some 200 news stories from the major news outlets aired or published since November shows an eerie similarity between the Citizens United agenda and what has been appearing in the press, not only in terms of specific details but in terms of omissions, spin, and implication.

She went on to document some of the spin, omission and implications and showed how these stories made their way through the media ecosystem until it was taken as a article of faith that there must have been “something” there. This was 1994, still at the very early days of the administration. It was obvious what was happening but it didn’t stop the press from eagerly chasing every shiny object that David Bossie and other right-wingers threw in their path. That dynamic would characterize media coverage throughout the Clinton administration.

And there is one major aspect of all this that people should keep in mind before they rely on the mainstream press to “do their own reporting,” as they insist they will. For all the breathless front-page coverage in mainstream papers and on evening newscasts, and the hundreds of millions of dollars spent by the Department of Justice, Congress and the Office of Independent Counsel, the only charge they were ever able to bring against Bill or Hillary Clinton was that Bill lied one time about having unauthorized fellatio in a deposition. That’s what they impeached him over and he was acquitted in the Senate. If any of the scandals pushed by the right had held up to the slightest scrutiny, there is little doubt that Ken Starr and his crew of zealous prosecutors would have charged them when they had the chance. There was, in the end, nothing.

There are two good books to read on this subject if you want to get up to speed. The first is “Fools for Scandal: How the Media Invented Whitewater” by Gene Lyons, which exposed how the New York Times was duped by some small town Arkansas political operators. The second, “The Hunting of the President” by Lyons and Joe Conason, brought the whole story together at the end of Clinton’s term. The press’s track record during this period and into the 2000 campaign can only be described as malpractice. It’s beyond belief that after all their failures and journalistic malfeasance they would formalize an agreement with a right wing operative to “share” his information.

If past is prologue, expect to see breathless reporting of obscure, exotic details leading to assumptions of wrongdoing which nobody really understands, certainly not the reporters. At some point they’ll issue the standard disclaimer: It’s not so much about actual wrongdoing, it’s the appearance of wrongdoing as if that’s enough to excuse their lazy assumptions. And then they’ll claim it’s all part of “narrative,” a narrative created by Republican operatives, knowing the media will swallow it whole and deliver it to the public as if it they thought of it themselves.

This is exactly what I mean when I say that reporters are lazy: It’s much easier to build a story when someone’s handed you the “facts” and a unifying narrative. Why do all that pesky interviewing and counter-interviewing when you can begin with the conclusion?

This is why I always advise people: When you hear something bad about a prominent Democrat, assume you’re not hearing the whole story. Give them the benefit of the doubt.

Because if you don’t, you leave our political system in the hands of the propagandists – which is exactly where they like it.