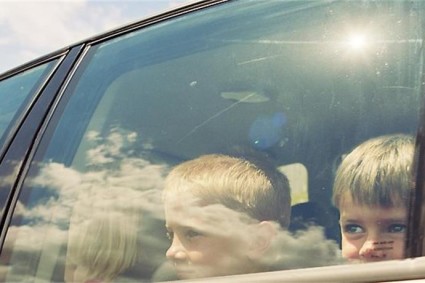 I was thinking about what I would do if I saw kids in real danger — you know, rolled-up windows, locked car, 98 degree day. I’d go over, knock on the window and ask the kids if they were okay. If they didn’t look okay, I’d call the cops. But to call the cops in a situation that was clearly under control, I guess because you don’t approve of the babysitter? You’re just a self-aggrandizing busybody:

Perhaps I’m clairvoyant, because my recurring nightmare of being a “neglectful mother who wasn’t actually neglectful” became realized last June, when I was in the car with my children, on the way to a picnic. We stopped at Kroger’s to buy cookies and chips. It was a gorgeous early June morning, oddly clear and pleasant for Virginia, the temperature in the low 70s. I pulled into the parking spot closest to the front door and surveyed the situation, something mothers do in one way or another a hundred times a day. My 13-year-old daughter sat in the front; she carries in her wallet a card from our local hospital showing that she graduated from their babysitting course, complete with CPR certification. She had her cell phone in hand, and was playing SpongeBob songs for her 8-year-old brother and 4-1/2-year-old sister, who were both buckled in their seats in the back. “Go on in,” she told me. “We’re fine.” I looked at the younger two, and eyed them hard. “Mommy’s running in real quick for cookies and chips,” I told my two younger kids. “Do not unbuckle. Your sister is in charge. I’ll be back in five minutes, tops.” I left the air-conditioning on instead of cracking the windows because I wanted them to feel the safety of being completely sealed inside the vehicle. The cookies and chips were right at the front, everyone was content—this would be quick.

I had been in the store for a couple of minutes and was already in line to pay when I got a text from my daughter that read, “You need to hurry up. There’s some creepy lady out here looking at us.” “Almost done,” I texted back, grabbing my bags, and heading for the door. I hadn’t even made it to the sidewalk before I spotted the police car pulling up.

It’s amazing how many decisions a person can make in an instant. As soon as I saw that cop, I straightened my spine and lifted my chin to take the most arrogant stance possible. My accent shifted into the higher gear I use at board meetings and when I have to be on television, flattened out and free of the extra syllables I was born with. I intercepted the cop before he got to my car. “Excuse me, officer? Are you here for my car? My daughter is 13 years old.” I said it like I knew exactly why he was there, because I did, and I said it like it was the most offensive and ridiculous thing that could be happening at that moment. But inside, I was shaking. I watch the news: I know how much can happen and how quickly when an authority figure decides to use that authority in unnecessary ways.

To his credit, the cop instantly apologized. “Ma’am, I’m sorry. Someone called in that there were children left unattended in a car, and you know how it is these days with children dying in hot cars and people being all concerned.” He was shaking his head the entire time, seemingly both at the sadness of the dead children in hot cars and at some people’s impulse to phone things in. He apologized for the trouble. But I wanted information. “Can I ask you, though, is what I did actually incorrect?” The officer couldn’t tell me if he was doing me a favor by not taking me to jail and sending my kids off to CPS. Because he had no idea. I asked him who called it in—he said he didn’t know. I thanked him for his diligence and his service to the community and he was gone.

I got in my car and let out all my air, and turned to my oldest, whose eyes were like saucers and who was shaking with rage. “I knew exactly what that woman was doing,” she told me, furious. My teenager said she sat up real tall in the car to make it clear that she had everything under control, that things were fine—she made sure to sing louder to convey that they all were hale and hearty. And she watched as the woman in the car parked in front of them dialed a number, put a phone to her ear, hung up, and walked away. And that was the moment my daughter texted me to hurry.

What most infuriated me is that if this person were so concerned with the welfare of my children, why did she just leave them there? Was it really enough to call the police and then abandon them to their fate instead of staying to see it through or waving friendly-like and allowing them to shoot her a thumbs-up “We’re good”? To me, that shows that she was less concerned about my children, and more concerned about feeling important, about being a part of a “happening” she could tell her friends.

Which is what distinguishes my opinion on the matter from the kinder one espoused my Ms. Brooks, who suggests in her essay that we are so disjointed as a community that people are no longer sure what to do when faced with a situation they don’t fully understand. “I see these good Samaritans slowing down in a parking lot, resisting the anonymity of modern life, wanting to help but unsure of what to do, of how to reach out or engage. I see them grappling with this uncertainty for the briefest moment, then reaching for the phone,” she says. But I’m too cynical to be that generous. The fact that the woman didn’t do anything to actually ensure my children were okay suggests to me that she wanted nothing more than a story, and to shame another citizen. “Can you believe what I saw? That’s right, I called 911.” Just another example of a person with no larger responsibility or sense of importance whose first impulse is to point a blaming finger instead of pitching in to help.