Of course it is!

Anyone who has ever been to a religious service is aware that the level of pious intensity occasionally abates; intensity must be relieved. All religious services therefore include what look (and sometimes feel) like intermissions.

Muslims, for example, are instructed about the when and where of the breaks in the sequence of their daily obligatory prayers.

Jews often separate afternoon and evening services (the Mincha and Ma’ariv) with a brief lesson (the Shiur) from an elder or rabbi that frequently discusses the sacred texts just recited in light of experiences in everyday life. In some Conservative congregations, as the Sabbath nears its completion, there is a longer pause to break bread, a chance not only to reflect but also to bond before continuing the prayers. 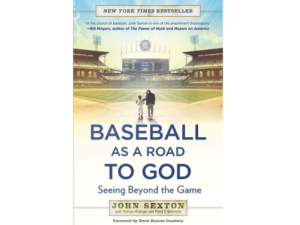 And Christians reserve time for choral or musical interludes that provide a few moments between rituals. From Christianity’s earliest moments, there has been an imprecise division, imprecise but no less real, between the preparatory part of the service and the part where believers affirm their central faith or take communion or both. And in some liturgies, this transition is marked by the “kiss of peace” or the “holy kiss.” Whatever it’s called, it is another break in the worship, one that most definitely enhances the feeling of fellowship. But the atmosphere is different from the moments of communion with God. The kiss of peace serves, as do the musical interludes, as a pause—meaningful but different, a break in the intensity of the action.

Baseball fans get this. At the midpoint of every seventh inning, we need no announcement, no request, much less a command. We simply rise from our seats. For some ninety years, this collective move has been accompanied by music in most major league cases a very, very familiar song that dates to the early-twentieth-century days of Tin Pan Alley. The Wave may have come and gone, beach balls have bounced into distant memory, but the seventh-inning stretch lives on in every baseball congregation. Possibly the most famous pause in American culture, it is an occasion to salute the game. And it is a break in the intensity of the action.