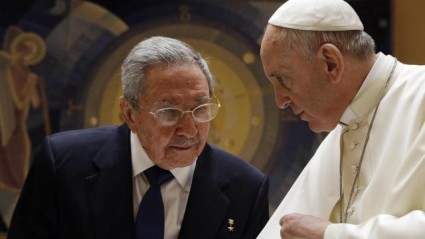 Who would ever expect that we’d see this in our lifetime?

After leaving the Vatican, Castro, the brother of Fidel, the revolutionary leader who brought the Communists to power in Cuba, gushed with praise for Francis. The pontiff “is a Jesuit, and I, in some way, am too,” Castro said at a news conference. “I always studied at Jesuit schools.”

“When the pope goes to Cuba in September, I promise to go to all his Masses, and with satisfaction,” Castro said at a news conference at the office of Italian Premier Matteo Renzi, whom he met with after the Vatican talks. “I read all the speeches of the pope, his commentaries, and if the pope continues this way, I will go back to praying and go back to the church, and I’m not joking,” he said.

It was a startling assertion for the leader of a Communist country, whose crackdown on dissidents in the past had drawn sharp Vatican criticism.

“I am from the Cuban Communist Party, that doesn’t allow (religious) believers, but now we are allowing it, it’s an important step,” Castro said.