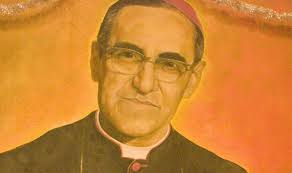 I think everyone knows or suspected that the CIA ran the assassination of Archbishop Oscar Romero, so this is a very interesting canonization:

Pope Francis is soon to beatify the late Monseñor Óscar Romero, the archbishop of El Salvador who was assassinated in 1980 by a right-wing, pro-capitalist death squad. Unlike others whom Francis has already consecrated, the Blessed (and, sooner than later, Saint) Romero will be a holy figure whose killers still walk the earth.

If a saint is a sanctified man of God, what do we call the killers of a saint? Is theirs an especial evil? I’m no theologian, but it seems that to kill a saint is in excess of mere man’s law. The Catholic Catechism exhaustively extols the sanctity of saints, saying that Christ’s “holiness shines in the saints.” How then do we describe a powerful organization that trains and gives sanction to the killers of saints? Even the Vatican says that Romero “was shot by a right-wing death squad,” which, as everyone who understands recent Salvadoran history knows, was trained in the United States.

During the Cold War, the Georgia-based School of the Americas (now called WHISC) trained tens of thousands of Central American soldiers for right-wing governments and insurgencies in order to neutralize leftist influence in countries like Nicaragua, Honduras, and Romero’s El Salvador, where civil wars in the 1970s and ’80s pitted U.S.-trained rightists against socialists and leftists who opposed their countries being used as a plantation in service of a Washington-backed elite.

A UN truth commission in 1993 would find that two-thirds of the right-wing soldiers in El Salvador’s horrific civil war were U.S.-trained, many of them to operate the “death squads” that became a feature of Central America while Washington played with a heavy hand to direct the region’s politics and economics.

Bishop Romero was a thorn in the side of Washington, preaching liberation theology in defense of the poor and becoming known as the “Voice of the Voiceless.” Increasingly worried about Washington’s meddling in El Salvador’s burgeoning war between rightists and leftists, Romero wrote a letter to President Jimmy Carter in 1980, calling out the United States’ support for the murderous right-wing forces who “repress the people and favor the interests of the Salvadoran oligarchy.”

He continued, condemning Washington’s major role in the creation of an armed, brutal capitalist elite:

“I am very concerned by the news that the government of the United States is planning to further El Salvador’s arms race by sending military equipment and advisors to ‘train three Salvadoran battalions in logistics, communications, and intelligence.’”

Five weeks later, Romero was assassinated by a U.S.-trained death squad while delivering mass at a small hospital chapel. No smoking-gun evidence exists pinning the hit on Washington, but the assassination was the hallmark of U.S. strategy during that time. In a 1984 report for The Progressive magazine, journalist Allan Nairn interviewed “dozens of current and former Salvadoran officers, civilians, and official American sources” and found “a pattern of sustained US participation in building and managing the Salvadoran security apparatus that relies on Death Squad assassinations as its principle means of enforcement.”