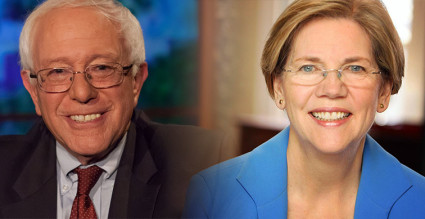 Let’s see if we can’t hold the votes together for the next round. But yes, it was sweet:

A seemingly unstoppable coalition of the powerful assembled to advance the Trans Pacific Partnership trade bill: A Democratic president aligned with the Republican majority in both chambers of Congress and the full lobbying might of Corporate America. But on Tuesday afternoon, the Senate Democratic minority delivered a surprise defeat to President Obama and a severe setback to one of the last few items on his presidential agenda. They blocked consideration of “fast track” trade authority – a crucial vehicle to get the Pacific trade pact through Congress. The victors: the ascendant populist wing of the Democratic Party, and its spiritual leader, Sen. Elizabeth Warren of Massachusetts. “Over and over, America’s workers have taken the brunt of bad trade deals,”the former Harvard professor and scourge of big business told a gathering of the Roosevelt Institute, a liberal think tank, hours before Tuesday’s vote.

“We can’t keep pushing through trade deals that benefit multinational companies at the expense of workers,” she added, with theatrical urgency. “Government cannot continue to be the captive of the rich and powerful. Working people cannot be forced to give up more and more as they get squeezed harder and harder.”
Warren masterfully undermined the trade bill, by highlighting the administration’s obsessive secrecy (the details of the proposed agreement are classified) and the role of corporate interests in drafting the deal (500 non-government advisors participated, she said, 85 percent of them industry executives or lobbyists).

“And now this trade deal is getting the full court lobbying press from those same giant multinational corporations,” she said. “The middle class is on the ropes and now is the time to fight back.”
Under intense pressure from the Warren wing, 44 of the 45 Democrats present Tuesday afternoon defied Obama. Even Sen. Ron Wyden (D-Ore.), the chief Democratic advocate for the fast-track bill, buckled.Proponents fell eight votes short of the 60 they needed to take up the fast-track bill. Senate free-traders will likely find a way to revive the bill, but Tuesday’s defeat will embolden opponents in the House, where the free-trade package already faced trouble. However the trade debate is resolved, Tuesday’s defeat in the Senate is likely to be a turning point, because it shows that the populists are now firmly in control of the Democratic Party. Anger over growing inequality has reached critical mass, and a backlash has begun against a political system that has, over the last three decades, allowed 100 percent of all income growth to go to the wealthiest 10 percent. The trade deal has for now become the victim of that anger – less because of the details of the TPP than because it hasn’t been accompanied by more protections and assistance for American workers. “I believe in this,” Obama said of the trade deal, “the same way… that I believe in a higher minimum wage. The same way that I believe in stronger protections for workers who are trying to get a voice in their company. The same way I believe in equal pay. The same way I believe in paid sick leave.” But Obama’s actions haven’t matched his words, and he didn’t require Republicans to accept any of those priorities before he joined them in pushing for free-trade legislation.Senate Republicans drove more Democrats into opposition when they declined requests to bring up other trade-related bills other than legislation offering a meager (and reduced) amount of training funds for workers who lose their jobs.

[…] At the White House, press secretary Josh Earnest called Tuesday’s vote a “procedural snafu.” But Obama was undone by more than procedure. His would-be successor, Hillary Clinton, was not courageous enough to take a position on the trade legislation, but her silence gave Democrats more freedom to oppose it. And Democrats in Congress bristled at Obama’s disparagement of opponents of the trade bill as emotional, illogical and dishonest. “The president is making some fairly nasty remarks about people on the other side, that they don’t understand we’re in the 21st century,” Joseph Stiglitz, a Nobel laureate in economics, said at the Roosevelt Institute gathering, at the National Press Club. “Actually we do. I don’t think he understands.”