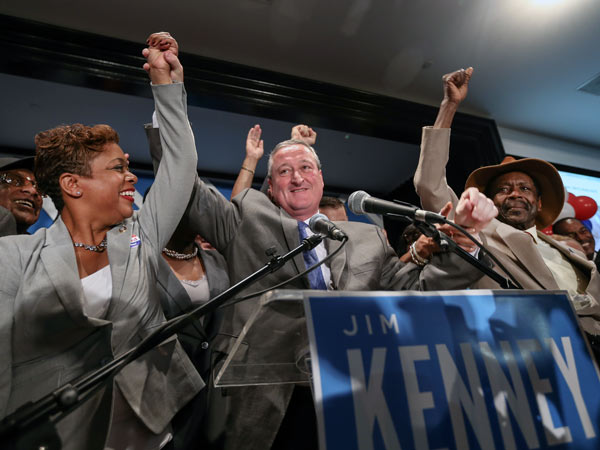 I’m way past the time when I allow myself to fall in love with candidates. But I admit to feeling a wee bit hopeful about what Jim Kenney can do for my beloved Philadelphia. Via the New York Times:

Jim Kenney, a former Philadelphia city councilman who has cast himself as a progressive in the mold of Mayor Bill de Blasio of New York, handily defeated five other candidates to win the Democratic nomination for mayor Tuesday, which makes him the overwhelming favorite to be mayor when national Democrats gather in the city in 2016 to pick their nominee for president.

An hour after the polls closed, The Associated Press said Mr. Kenney was the winner.

He addressed his supporters shortly after 10 p.m., after his leading opponents had conceded. “We are not done,” he said. “There’s another election in November.”

In this heavily Democratic city, the winner of the primary is almost certain to prevail in the November general election to replace Mayor Michael A. Nutter, who cannot seek re-election after two terms. Mr. Kenney, 57, was already sounding like a victor before people went to the polls.

“Together with an open mind and an open heart, we can do really great things in this city,” Mr. Kenney told his supporters Friday at a rally at a downtown apartment building that markets itself as an “urban L.B.G.T.-friendly senior apartment community.” He was endorsed by Mr. de Blasio on Monday.

The setting was designed to spotlight the broad coalition Mr. Kenney had built; he won not only the backing of labor unions, but also support from women’s rights advocates, gay rights advocates, environmentalists and some prominent black elected officials, significant because Mr. Kenney is white and race plays a powerful role in elections in this predominantly minority city.

Mr. Kenney’s toughest opponent was State Senator Anthony Hardy Williams, 58, an African-American lawmaker who is a strong supporter of charter schools and a fierce critic of the aggressive police tactic known as “stop and frisk.” Education was a central issue in the race; Philadelphia’s public schools are facing an $80 million deficit.

But over all, the turnout was low. That weighted the electorate toward affluent and educated voters, who tend to be Kenney supporters.

2 thoughts on “It’s a landslide for Jim Kenney”