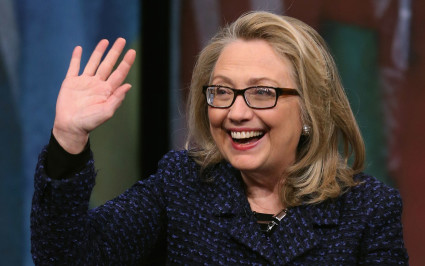 The chattering classes are clutching pearls over this recent NY Times article, in which the latest Clinton scandal is identified as her campaign’s willingness to have an actual strategy to win. Esmeralda, run and get my smelling salts!

Even Matt Taibbi jumped into the fray yesterday, with a disjointed and rambling rant. (I still can’t identify his main point, other than that he’s a Bernie Sanders supporter who hates the Clintons.)

Lots of smart people took on the Times over that same story, because the reporters were wrong on their premise: Obama’s path wasn’t “much narrower”. He won bigger than Bill Clinton, with more votes and a higher percentage. It almost seems as if the Times was saying that winning with votes from all those colored people somehow taints the process, but the Times is a famed librul paper, so I must be wrong.

Digby dissected the path to the fainting couch thusly:

Ed Kilgore over at the Washington Monthly took issue with [Brian] Beutler’s definition of triangulation explaining that it was actually something that Clinton critics (and one backstabbing advisor — Dick Morris) used to describe the administration’s approach. I can only say that from the standpoint of an observer from afar, the most vexing aspect of the Clinton administration’s approach, whatever you want to call it (and which frustratingly continued in the Obama administration) was the idea that capitulating to Republicans on thorny issues like welfare reform, gun control or abortion would result in “getting them off the table” and lead the public to support liberal programs in the future.

This has never happened. When you give Republicans an inch they will take a mile and it only resulted in moving the political center farther and farther right. The good news is that the Republican Party has now fallen off the cliff and it’s possible that a majority of the country has finally seen them for what they are. The bad news is that they control the Congress and half the country still votes for them.

Beutler goes on to say that Hillary Clinton’s strategy so far seems to indicate that she has adopted a much different approach, presumably based upon the lesson learned in both her husband’s and the Obama administrations:

The nature of the strategy involves staking out a variety of progressive issue positions that enjoy broad support, but it’s not as straightforward as simply identifying the public sentiment and riding it to victory. The key is to embrace these objectives in ways that makes standard Republican counterspin completely unresponsive, and thus airs out the substantive core of their ideas: Rather than vie for conservative support by inching rightward, Clinton is instead reorienting liberal ideas in ways that make the Republican policy agenda come into greater focus.

It sounds as though she does not hold the fatuous notion that she can vie for conservative support. Indeed, why would anyone in their right mind think she could? Basically, she’s taking popular positions and making the Republicans have to explain why they oppose them. This shouldn’t strike anyone as being particularly odd unless you are a Democratic strategist who believes that only a handful of people could ever vote for popular liberal issues.

And finally, Charles Pierce on the aftermath of what he termed “a preposterous story”:

He makes even less sense than Fournier, which is saying something.

This strategy is bad, first, for the country. America has always had tough partisan politics, but for most of its history, the system worked because it had leaders who could reframe debates, reorganize coalitions, build center-out alliances and reach compromises. Politics is broken today because those sorts of leaders have been replaced by highly polarizing, base-mobilizing politicians who hew to party orthodoxy, ignore the 38 percent of voters who identify as moderates and exacerbate partisanship and gridlock. If Clinton decides to be just another unimaginative base-mobilizing politician, she will make our broken politics even worse.

Actually, the worst thing HRC could do to what Brooks laments as “our broken politics” is get herself elected as a Democrat because the Republican party determined as a basic principle that no Democratic president will be allowed to govern as a Democrat. They established this principle about 11 seconds after HRC’s husband got elected in 1992. The prion disease that afflicts the higher centers of the Republican brain shows as its most garish symptom a reckless, gleeful vandalism toward political custom.

That is the great failure of our elite political media — a complete disinclination to look at what is plainly right there in front of them. It is simply not considered good form among our political elites to note that one of our two political parties has lost its mind and that it has committed itself to wrecking our politics if it doesn’t always get its way. A radicalized Supreme Court takes up a laughable case through which it seeks to destroy the Affordable Care Act, and the Republicans in Congress already have rejected out of hand the easiest way to solve what never should have been a legal problem in the first place. But the timing of all this thumb-sucking is even more curious.

Last week, HRC gave a thwacking good speech on the efforts by the Republican party, and by various foundation-fattened “independent” political groups, to restrict the franchise of people who are unlikely to vote for Republicans. She called people out. She named names. Suddenly, the respectable political class is horrified by her “base mobilizing.” Since when did support for every individual’s right to vote become nothing more than a way to charge up your liberal base? (If you answered, “For the Republicans? About a day after the Voting Rights Act was signed in 1965,” you win today’s grand prize.) Apparently, calling out the new Jim Crow for what it is may wake the children and disturb the horses. Since when did expanding the franchise become a threat to the “center-out” politics over which slobbers David Brooks, who spent his formative years cheering on the destruction of those politics on behalf of wolvering conservatism?

I have no idea whether HRC will “tack back to the center,” or whatever the cliche du jour turns out to be in the high midsummer of 2016. But, for now, if she’s making the likes of Ron Fournier and David Brooks nervous about their ongoing journalistic malpractice, that’s all to the good.

I would hope that anyone who’s been reading blogs for more than a few months understands how the so-called game works, but I’ll leave you with a refresher:

Candidates run for president. They promise to pursue certain policies. Implicit in the promises is the understanding that they have to get enough down-ticket support to execute those policies. If the public support for those policies is evidenced by strong electoral support (i.e. congressional and senate races), they are likely to come to pass.

Politicians do not run on their “feelings.” They run on policies. Bernie Sanders gives a wonderful speech, but unless he is also building a campaign machine that will bring in the support to execute his policies, it is simply pie in the sky.