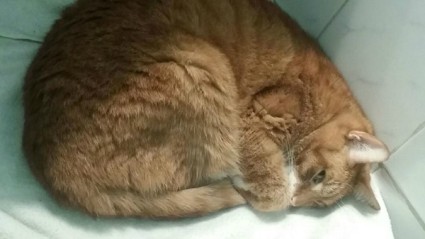 Sometimes people accuse me of hating animals, and I don’t. But I do avoid them, due to my allergies. And even if I wasn’t allergic, I probably wouldn’t get an animal because of the high cost of taking care of them. (I have a neighbor who spent more than my car cost to get chemo for her dog.) I’m a responsible person, I don’t take on things I can’t afford.

But this? This is just sickening:

“We just came back from seeing Tiger Tim at the vet. The news is not so good. On top of everything else, his white blood cell count is sky high. The vet is not sure why and sent off more blood for further testing. He is on heavy-duty intravenous antibiotics. The only bit of good news is that he does not have hepatic lipidosis, which is the main concern when cats stop eating. His kidney values are good.”

In a heartless and purely selfish act, seven-year-old Tiger was recently surrendered to New York City Animal Care and Control because his owner purchased a new couch.

Tiger had lived with his family since he was only three-months-old and cried with deeply sorrowful meows as his owner walked away and left him sitting on the counter where unwanted pets are surrendered. Even when the attendant warned the woman that Tiger could be euthanized at anytime, she was unmoved.

On the day, Tiger was scheduled to be euthanized, Magnificat Cat Rescue and Rehoming from Bronx, New York City stepped in to save his life. A volunteer tells more of the tragic story:

“You said you got him when he was just three months old, and that he was now seven. You said he was a good cat, well-behaved and affectionate. That he followed you around and kept you company. That he waited at the door for you every night and that he was so happy when you came home from work. You signed the ACC paperwork, which states that a surrendered animal may be euthanized. Then you left him there and walked away, even though he cried.”

Although Tiger was rescued, his sad story continues. The organization reports Tiger has recovered from his upper respiratory infection, but he refuses to eat and refuses to drink. Volunteers have been force feeding him to keep him hydrated and alive, however he just continues to stay curled up in a ball and just doesn’t want to move.

One thought on “Who does this?”