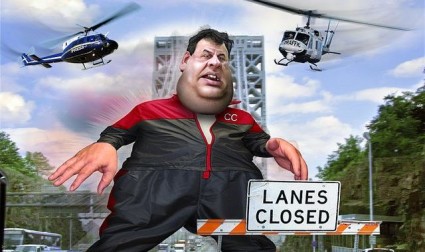 Well, it’s about time. Tom Moran, editor of the Newark Star-Ledger (who endorsed Christie for reelection), takes the unusual step of warning voters about Chris Christie’s pathological lying and causes quite an uproar:

They all lie, and I get that. But Christie does it with such audacity, and such frequency, that he stands out.

He’s been lying on steroids lately, on core issues like Bridgegate, guns and that cozy personal friendship with his buddy, the King of Jordan. I’ll get to all that.

But let’s start with my personal favorite. It dates back to the 2009 campaign, when the public workers unions asked him if he intended to cut their benefits.He told them their pensions were “sacred” to him.”

“The notion that I would eliminate, change, or alter your pension is not only a lie, but cannot be further from the truth,” he wrote them. “Your pension and benefits will be protected when I am elected governor.”

He then proceeded to make cutting those benefits the centerpiece of his first yearin office.

This, we know now, was vintage Christie. Other lying politicians tend to waffle, to leave themselves some escape hatch. You can almost smell it.

But Christie lies with conviction. His hands don’t shake, and his eyes don’t wander. I can hardly blame the union leaders who met with him for believing him.

“He seemed very sincere,” says Bill Lavin, head of the firefighters union. “Why doubt someone who tells you this is sacred to them?”

[…] “We just won a major court decision supporting the pension reforms that we put into place in 2011,” he told George Stephanopoulos of ABC News.

Supporting the pension reform? The court found those reforms to beunconstitutional. Christie had to know that, because it was an argument put forward by his own lawyers so that he could escape the law’s provision requiring big payments into the pension fund.

These are painful moments for New Jersey reporters who cover Christie. Stephanopoulos and Kelly are facing a crowded Republican field with more than a dozen contenders. They can’t be expected to know this stuff. Which is why Christie prefers to sit down with the national press. It’s easier to get away with these lies. For now.

Is it fair to use the word “lies” to describe these moments? After all, an honest mistake is not a lie. And sometimes politicians make promises they intend to keep, but circumstances prevent them. So what qualifies as an actual lie?

Here is one that doesn’t make the cut: Christie broke his promise to make pension payments, which some consider a lie. But I don’t. The economy slowed down and he didn’t have the expected revenue. Democrats were surprised as well.

But the examples in the list above, which is only a sampling, are deliberate and serve Christie’s political purposes. None are course corrections based on fresh information.

Webster’s defines lie this way: “To make an untrue statement with intent to deceive.” That fits neatly.

And that’s my warning to America. When Christie picks up the microphone, he speaks so clearly and forcefully that you assume genuine conviction is behind it.

Be careful, though. It’s a kind of spell.

He is a remarkable talent with a silver tongue. But if you look closely, you can see that it is forked like a serpent’s.

One thought on “NJ editor on Christie: ‘He lies’”