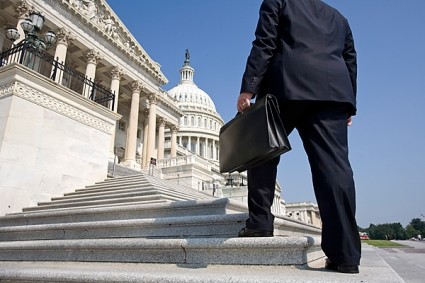 Reading this Mother Jones piece this morning was some interesting timing:

In the 2008 presidential race, Hillary Clinton made no excuses for the $2 million she collected from registered lobbyists, saying, “Based on my 35 years of fighting for what I believe in, I don’t think anybody seriously believes I’m going to be influenced by a lobbyist.” But lobbyists would appear to have more than a little influence on her 2016 campaign. Not only is she still accepting donations from them—something President Obama declined to do in his 2008 and 2012 bids—but she is once again stocking her campaign with them.

There are at least six Clinton campaign staffers who, at one time or another, earned a paycheck as a registered lobbyist. They’ve lobbied for a range of controversial special interests, from the Keystone pipeline and Lehman Brothers to SeaWorld and some of the country’s largest corporations.

A friend who was a Republican operative once pointed something out. She said, “When we want you to work for us, we remove all the obstacles. We get you a good job, we get your spouse a job, we’re nice to you, we don’t work you into the ground. Democrats do exactly the opposite. They expect you to work for free, and then they yell at you that you’re not doing enough for the job they’re not paying you for! Meanwhile, you’re wondering how to pay your electric bill.”

I wasn’t a registered lobbyist, but I did work for a small progressive consulting and lobbying firm, and was damned glad to get the work. (Because rent.) And after working on a high-profile mayoral primary, I was approached by PR and lobbying firms. Everyone told me to monetize my political experience — and I didn’t. I just didn’t have the stomach for it.

Now I write for a blog; I don’t even make enough money to pay my freakin’ taxes, let alone go on a vacation. I am in a chronic state of high anxiety about money, because I am — what is the technical term? — poor. I don’t even have life insurance, so my kids will have to pay to have me cremated.

So when I saw this group email yesterday from a depressed colleague, talking about how he’s packing it in and heading home after failing to line up enough campaign work to justify working in progressive politics, I didn’t hesitate to tell him:

Look, it’s really hard to work in progressive politics without selling out at some point. It’s almost impossible to survive on what these jobs pay, especially if you have a family. It’s probably not a coincidence that so many of the people in Dem policy circles already come from privileged backgrounds. Who else can afford the career path?

So you’re leaving with your integrity intact, which should count for something.

Yes, it counts for something. But it DOES NOT pay the bills, as he has learned. I know far too many organizers and activists who, well into their 30s and 40s, are still sharing apartments, don’t own cars and can’t afford to have kids. That’s because progressive politics does not pay a living wage.

Ironic, right? I could tell you stories…

And the crummy part is, the idealistic children of the rich can afford to work in progressive politics, guaranteeing that, no matter how well-meaning they are, there is no real voice for the working class in policy circles. If there was, evil and stupid ideas like the “skin in the game” theory of healthcare (in which we purposely pile on large co-pays and deductibles so consumers don’t “overuse” healthcare) would never have gotten traction.

So when I read about Democratic operatives working as lobbyists, I understand perfectly how that happens. Presidential races only happen every four years. If you’re lucky, you get 18 months’ employment out of a campaign. How do you pay the bills in the interim?

We aren’t the right wing and we don’t have anything like wingnut welfare. Sure, we have some jobs, some think tanks, but those jobs tend to go to the already-privileged. And liberal groups expect you to have actual experience, which usually means you had to have enough money to get on the intern-to-career track. (D.C. is an expensive place to live — unless you’re lucky enough to snag a rent-controlled apartment. I once knew an IT guy who got a pretty good mid-level appointment in the Clinton administration, and he could only afford to share a house with three roommates.)

Not all lobbyists are scumbags. (If you read the Mother Jones story, you’ll see that a couple of the Clinton lobbyists worked for Americans for Gun Safety, Center for American Progress, and on medical marijuana legislation.)

I have a dear friend (Ivy League law school grad who also has a master’s degree), a highly-principled progressive who works for her state’s legislative leader. She’s guided some important legislation into passage, and she just loves her work.

For her hard work and long hours, she makes $36,000 a year. She has four kids, and commutes three hours a day. We’ve talked about the inevitable day when she accepts an offer from a lobbying firm, and I hope she does. It would be nice for her to be able to breathe.

While it may validate a need to see everything in black and white, attacking every single person for being a lobbyist only proves you don’t have a clue about the overwhelming odds against making a long-term living wage in anything related to progressive politics.