Remember “kerning”? Remember when this was the “proof” that Dan Rather’s documents about George W. Bush’s spotty Air Force record were forged? Now we have “scoring” (which is the wingnut version of crop circles) as the new proof that IRS official Lois Lerner was trying to hide documents. From Grover Norquist’s group Americans for Tax Reform, the latest round of silliness:

New documentation released by the House Oversight Committee this week again raises questions on how Lois Lerner’s hard drive was physically damaged and whether there was some kind of deliberate act to destroy data on it.

The House Oversight Committee report cites an officially transcribed interview with John Minsek, senior investigative analyst with the IRS Criminal Investigations (CI) unit. Minsek examined the Lerner hard drive in 2011. In the transcribed interview, he notes Lerner’s hard drive contained “well-defined scoring creating a concentric circle in the proximity of the center of the disk.” The Oversight Committee report states:

So how did the scoring get there?

Last month, testimony from the Treasury Inspector General for Tax Administration (TIGTA) revealed that Lois Lerner’s hard drive had “scoring on the top platter of the drive.” The testimony also noted that the IRS technician that inspected the hard drive believed that additional steps could have been taken to recover data, although this did not occur and the hard drive was later destroyed by an industrial strength AMERI-SHRED AMS-750 HD shredder.

Given these facts, it is logical to question how the “scoring” occurred and whether there was foul play involved. Here it what is known thus far:

“Based on consistent network reporting for more than a week, the laptop computer was likely located in Ms. Lerner’s office.”

Hmm. Very, very suspicious. Unless you’ve ever owned a laptop. “Heat related failures are not seen often”? I guess every laptop I’ve ever owned was special.
But seriously, this laptop was probably damaged with some kind of impact — or a failing hard drive. Because that’s what happens with laptops. Oh look, here’s a wiki page that describes this very thing:

A head crash can be initiated by a force that puts enough pressure on the platters from the heads to scratch through to the magnetic storage layer. A tiny particle of dirt or other detritus, excessive shock or vibration, or accidentally dropping a running drive can cause a head to bounce against its disk, destroying the thin magnetic coating on the area the heads come in contact with, and often damaging the heads in the process. After this initial crash, countless numbers of fine particles from the damaged area can land onto other areas and can cause more head crashes when the heads move over those particles, quickly causing significant damage and data loss, and rendering the drive useless. Some modern hard disks incorporate free fall sensors to offer protection against head crashes caused by accidentally dropping the drive. 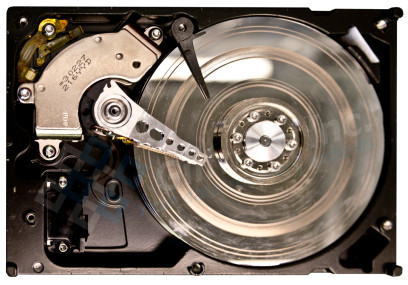 One thought on “Scoring is the new kerning”