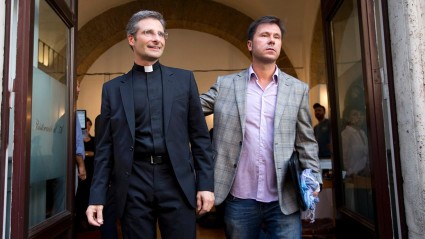 This priest wasn’t fired for being gay. He was fired for publicly and blithely ignoring his vows of celibacy, and announcing it at a press conference designed to cause maximum PR problems for the pope:

VATICAN CITY (Reuters) – The Vatican on Saturday dismissed a Polish priest from his Holy See job after he came out as gay and called for changes in Catholic teachings against homosexual activity on the eve of a major Church meeting on the family.

Monsignor Krzysztof Charamsa, a theologian, had worked at the Congregation of the Doctrine of the Faith, the Vatican’s doctrinal arm, since 2003, and taught theology at pontifical universities in Rome, which have also dismissed him.

Charamsa, 43, told Italy’s Corriere della Sera newspaper and Polish media that he was gay and had a partner. The Church teaches that homosexuality is not a sin but homosexual activity is, and priests, whether heterosexual or gay, take vows of celibacy.

Charasma followed up his media interviews with a packed news conference with his partner and gay activists at a Rome restaurant. They had planned a demonstration in front of the Vatican but changed the venue several hours before it was due to have started.