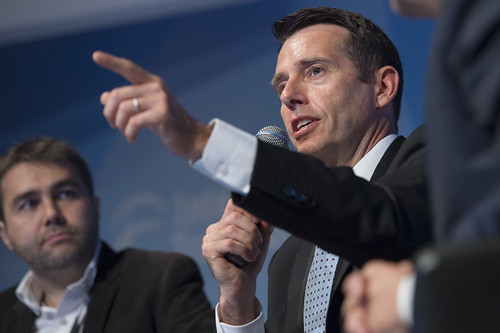 Still impressed with themselves, ain’t they? Someone should remind them they didn’t accomplish most of those grand plans:

David Plouffe praised Clinton in a tweet as “someone who can win a gen elex” and wondered whether Republicans could produce a candidate capable of winning swing states like Nevada, Colorado, Ohio and Virginia. Obama ally Stephanie Cutter needled Clinton’s top rival, Sanders, for declaring that he isn’t “a pacifist” during the debate. And Ben LaBolt, another former Obama aide, ripped Sanders for futility in Congress, noting that he “passed nearly nothing.” Obama alumni Bill Burton and Jon Favreau were complimentary of Clinton as well.
But there was a clear divide. Even among those Obama allies who praised Clinton’s performance, there were overt shots at Clinton’s longer-term strategy.

“I wonder if the nameless @HillaryClinton supporters will stop promoting the stupid strategy of abandoning NH after this performance,” tweeted Mitch Stewart, who ran Obama’s 2008 Iowa operation and developed his battleground-state strategy in 2012.
Pfeiffer, too, added that “the person who advised Hillary to do less debates” must be in trouble.

Jon Lovett, a former Obama speechwriter, offered some backhanded praise: “It still feels pretty true that the only person who could beat Hillary Clinton is Barack Obama.”