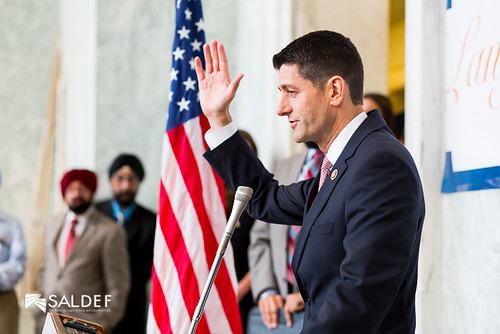 Remember, Paul Ryan only looks sane compared to the rest of them. This is, after all, the guy who wants to privatize Social Security:

The speaker’s vote, while the easiest of the challenges before Ryan, contains a kernel of the larger problems he is likely to face. The Freedom Caucus didn’t technically endorse the Wisconsin Republican’s bid for speaker, which would have required 80 percent of its membership to be for him. Rather, it offered a super-majority recommendation, meaning that at least 65 percent of their members wanted Ryan as speaker. So, even on a vote that is entirely defensible to your constituents and even to most — though not all — of the conservative talk types out there, the most conservative element of the party couldn’t unite behind Ryan.

What will happen when the fights are over the annual budget or raising the debt ceiling or immigration policy? It seems unlikely to me that a Freedom Caucus will abandon their convictions solely because they like Ryan and think he is, generally, a good guy. That will leave Ryan with a choice: Does he work with Democrats to pass legislation or does he hold his ground, go damn-the-torpedoes and see what happens if, say, the debt limit isn’t raised?