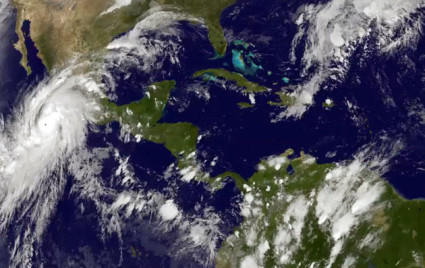 Here’s photo of Hurricane Patricia from the AP. This one is going to be really dangerous.

Residents of a stretch of Mexico’s Pacific Coast dotted with resorts and fishing villages boarded up homes and bought supplies ahead of Friday’s arrival of Hurricane Patricia, a monster Category 5 storm that forecasters say is the strongest ever recorded in the Western hemisphere.

With maximum sustained winds near 200 mph (325 kph), Patricia is the strongest storm ever recorded in the eastern Pacific or in the Atlantic, said Dave Roberts, a hurricane specialist at the U.S. National Hurricane Center.

Patricia’s power was comparable to that of Typhoon Haiyan, which left more than 7,300 dead or missing in the Philippines two years ago, according to the U.N.’s World Meteorological Organization.

In Mexico, officials declared a state of emergency in dozens of municipalities in Colima, Nayarit and Jalisco states that contain the bustling port of Manzanillo and the posh resort of Puerto Vallarta. The governor of Colima ordered schools closed on Friday, when the storm was forecast to make what the Hurricane Center called a “potentially catastrophic landfall.”

The Hurricane Center said Patricia was expected to bring rainfall of 6 to 12 inches, with isolated amounts of up to 20 inches in some locations. Tropical storm conditions were expected to reach land late Thursday or early Friday, complicating any remaining preparation work at that point.

“We are calm,” said Gabriel Lopez, a worker at Las Hadas Hotel in Manzanillo. “We don’t know what direction (the storm) will take, but apparently it’s headed this way. … If there is an emergency we will take care of the people. There are rooms that are not exposed to wind or glass.”