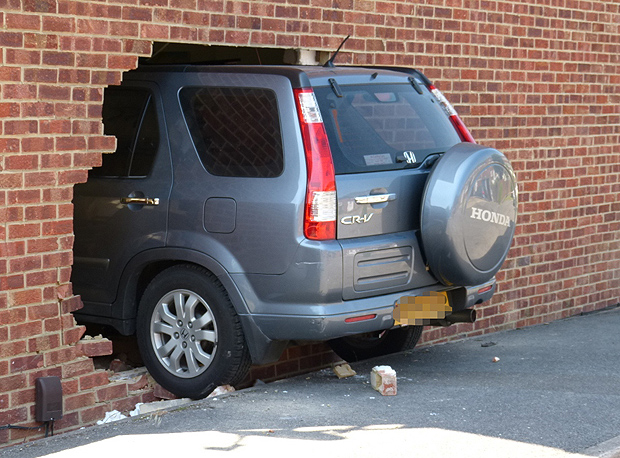 I’m very dismayed that I’m still having trouble from the car crash. My left hand is still only about 75% (it was on the steering wheel when I slammed into it) and it doesn’t feel right — kind of numb and painfully throbbing at the same time, with nerve pain shooting down my forearm when I type. My thumb is still not much use for anything, although slightly better.

And my chest pain, while better, is apparently going to be around for a while. A friend who was in a similar accident says it will take at least a month. So I am still grabbing myself every time I have to cough or sneeze, and probably will be for a while. (It’s the hiccups that are really painful.) And I’m short of breath because it hurts when I breathe.

I didn’t realize until yesterday that my right knee must have slammed into the center console, or the dashboard. There’s a rather large bruise and the leg is all swollen. But of course I can’t see a doctor until I get my car.

About the only thing I didn’t hurt was my neck, oddly enough.

Sigh. It could have been so much worse, and I realize that. But right now, it’s hard to feel grateful. I wish I didn’t have to work; I’d rather be resting. And it’s hard to be alone when you need help.

I was talking to a beloved niece yesterday who just gave birth. (Yay! It’s a boy, his name is Colin and she gave him my father’s name for his middle name.) She was in a serious accident a couple of years ago, and I shared my fears about getting behind the wheel again. She said it was a struggle for her for a long time, and that she still gets panicky in the car. (Swell.)

Well, I guess all this crap is going to take a while. That’s life, as Frank once sang.