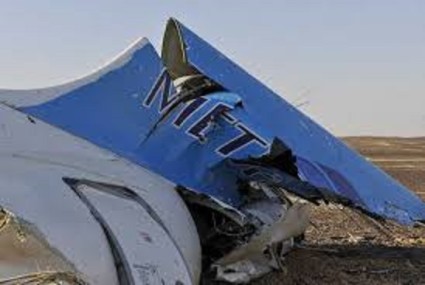 Why do I get the feeling that this is meant to draw us into another war?

A U.S. official told CNN on Tuesday that a “heat flash” over Egypt’s Sinai Peninsula was detected by a military satellite just before the Saturday plane crash that killed 224 people aboard a Russian airliner, the network reports. The account echoes an NBC report sourced to two senior defense officials, and both reports say that the satellite evidence indicates that a “catastrophic in-flight event”—possibly an explosion caused by a bomb or mechanical failure—downed Metrojet Flight 9268. NBC says that it’s unlikely that a missile could have caused the crash because the satellite that picked up the flash would have also registered the “heat trail” of a missile but did not; CNN also says the U.S. has ruled out the possibility that the plane was shot down.

Metrojet officials said Monday that they were sure that the crash had not been caused by mechanical failure or pilot error but didn’t provide any evidence of that claim. The plane involved, an Airbus A321, dropped some 5,000 feet in a minute before breaking into pieces and never issued a distress call.