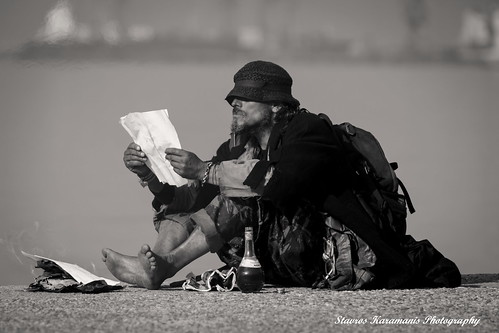 Good idea. Texting and driving is so freaking dangerous, it would be nice to catch them before they crash into someone else:

Recently, a police officer who works for the Montgomery County Police Department dressed up like a homeless man to try to catch drivers who were texting while driving. Officer Robinson accessorized his outfit with tattered gloves and débuted his grungy look on a road in Bethesda. He completed his appearance with a cardboard sign announcing that he was not in fact homeless. The sign also explained that he was a Montgomery County Police officer who was in fact on the prowl for people texting while driving.

As the “homeless” officer stood on the side of the road, he would report to police officers standing by using a concealed radio whether a person was texting behind the wheel or not wearing a seat belt. In addition to the hidden radio, he also wore a concealed camera. The footage obtained by the camera will be used if any of the cases wind up in court.

According to Kush Arora, a defense attorney in Maryland, “Relatively few people end up challenging texting while driving charges in court due to the mild repercussions relative to other traffic charges. However, the use of the body camera and concealed radio on the part of the undercover officer to record evidence certainly provide further deterrence from doing so.”

Police officers in Montgomery County are able to pull people over and issue a citation on the spot if they observe them texting while driving because it is a primary offense. During Officer Robinson’s 2-hour operation, the police ended up issuing 56 tickets and 22 warnings. Each person found guilty of texting will driving will have to pay $70 and have a point added onto their driver’s license.

Police officers involved in the operation handed out additional tickets for driving without a license, driving on the shoulder, negligent driving, and failure to display registration. A similar strategy was previously used in California by the San Bernardino Police Department to ticket distracted drivers.