Here are some highlights…

“If you raise the minimum wage, you are going to make people more expensive than machines,” said Florida Sen. Marco Rubio when his turn came to address the subject. Rubio, who has been gaining ground in some recent opinion polls, called the minimum wage “in the 20th Century” a “disaster.”

“Taxes too high, wages too high,” he later added. “We’re not going to be able to compete against the world. I hate to say it, but we have to leave it the way it is. People have to go out, they have to work really hard and they have to get into that upper stratum. But we cannot do this if we are going to compete with the rest of the world. We just can’t do it.”

Asked for his own take on the issue, Ben Carson said it would be misguided to raise the minimum wage, which remains $7.25 per hour. In particular, Carson said he would be concerned that such a raise might keep young African-Americans out of the job market. The neurosurgeon alluded to his own first job in a lab, which “gave me what I needed to ascend the ladder of opportunity.”

Despite going against their own interests, many working people, especially where I live, vote Republican…

Nobody should be surprised that many of America’s working poor are socially conservative. After all, the poor are more likely to be religious. If you are faced with the decision to vote for a party that you perceive to be marginally worse on safety net issues but much better on, say, abortion, what is the rational choice?

In that position, you’d vote where you could make a difference, of course.

It’s narcissistic and dismissive to tell workers that they couldn’t possibly know what’s best, that they should define themselves by the economic strata they inhabit — and that once they’ve done that, they would vote for the correct (read: left of center) candidates.

Consider also that the poor vote against their best interests when they vote for any national candidate. Voting at all is being complicit in your own oppression. Regressive taxation wasn’t dreamed up by a McDonald’s cook. Banking codes that prohibit credit unions from making small short term loans are the entire reason we have payday lenders. If workers had been writing health care policy, we’d be negotiating for cheaper prescriptions instead of explicitly enriching certain pharma companies.

Hoo boy… it blows my mind.

And then, there are the “facty” facts… 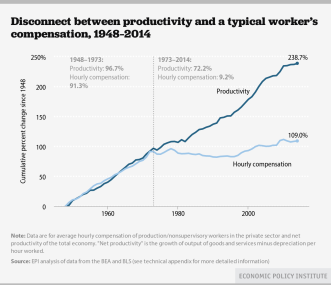 I am trying to understand why some people think they do not deserve being able to save and have a little nest egg, decent housing, access to healthcare, being educated no, and all the things that give everyone in civilized society a better quality of life.

And so many that I know will vote for one of these 1% members and still take home a minimum wage.

Many of these people I know only represent “interest bearing accounts” for the candidates.

3 thoughts on “Minimum wage discussed at the debate…”