So, it must must be the week for the “overly sensitive.”

You know, I know people that REALLY have OCD (obsessive compulsive disorder) and, yes, I have witnessed the torment of those that truly suffer from it. Chapped hands, repetitive motions, and having to adjust items in one’s environment because they aren’t straight.

But, sometimes, popular culture takes on these disorders and they become a “fad.” That is, people diagnose themselves to have these disorders. “Gluten intolerance” comes to mind. Now, I have cut gluten out of my diet, not because I “believe” I have celiac disease. I was told that it may relieve symptoms of arthritis in my joints.

Here is the latest in “outrage”… 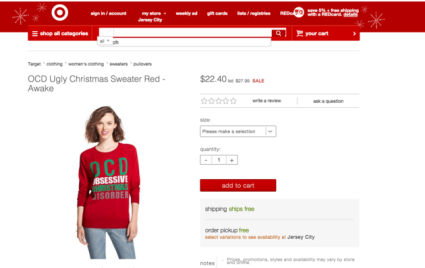 Some consumers argued that that the sweater made light of mental illness. Over 2 million adults in the U.S. suffer from obsessive compulsive disorder…

While Target may not have intended to offend anyone, there is real harm in using terms for mental illness metaphorically.

You know, I guess that maybe I am just not sensitive enough. I can understand using a racial slur, things like that. But, this?

But, are we going to stop using elfs in the Christmas motif, because they make fun of small, short people?

Is this sweater pissing anyone off that is reading this?

Maybe, I need more coffee… in a red cup.

Update: Rebecca Fuoco contacted SG and said the quote that was used in the ink was a misquote. I have removed her quote

5 thoughts on “Target in the crosshairs for ugly sweater…”