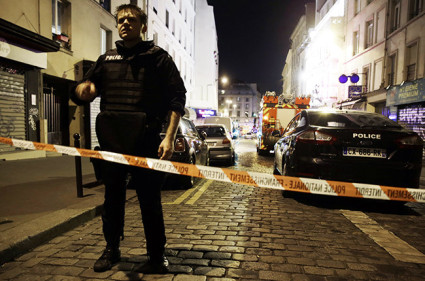 So I was relaxing as best I could, but it was impossible to ignore the big news Friday night. Charlie Pierce said it best:

It is long past time for the oligarchies of the Gulf states to stop paying protection to the men in the suicide belts. Their societies are stunted and parasitic. The main job of the elites there is to find enough foreign workers to ensla…er…indenture to do all the real work. The example of Qatar and the interesting business plan through which that country is building the facilities for the 2022 World Cup is instructive here. Roughly the same labor-management relationship exists for the people who clean the hotel rooms and who serve the drinks. In Qatar, for people who come from elsewhere to work, passports have been known to disappear into thin air. These are the societies that profit from terrible and tangled web of causation and violence that played out on the streets of Paris. These are the people who buy their safety with the blood of innocents far away.

It’s not like this is any kind of secret. In 2010, thanks to WikiLeaks, we learned that the State Department, under the direction of then-Secretary of State Hillary Rodham Clinton, knew full well where the money for foreign terrorism came from. It came from countries and not from a faith. It came from sovereign states and not from an organized religion. It came from politicians and dictators, not from clerics, at least not directly. It was paid to maintain a political and social order, not to promulgate a religious revival or to launch a religious war. Religion was the fuel, the ammonium nitrate and the diesel fuel.Authoritarian oligarchy built the bomb. As long as people are dying in Paris, nobody important is dying in Doha or Riyadh.

Saudi Arabia is the world’s largest source of funds for Islamist militant groups such as the Afghan Taliban and Lashkar-e-Taiba – but the Saudi government is reluctant to stem the flow of money, according to Hillary Clinton. “More needs to be done since Saudi Arabia remains a critical financial support base for al-Qaida, the Taliban, LeT and other terrorist groups,” says a secret December 2009 paper signed by the US secretary of state. Her memo urged US diplomats to redouble their efforts to stop Gulf money reaching extremists in Pakistan and Afghanistan. “Donors in Saudi Arabia constitute the most significant source of funding to Sunni terrorist groups worldwide,” she said. Three other Arab countries are listed as sources of militant money: Qatar, Kuwait and the United Arab Emirates. The cables highlight an often ignored factor in the Pakistani and Afghan conflicts: that the violence is partly bankrolled by rich, conservative donors across the Arabian Sea whose governments do little to stop them. The problem is particularly acute in Saudi Arabia, where militants soliciting funds slip into the country disguised as holy pilgrims, set up front companies to launder funds and receive money from government-sanctioned charities.

It’s time for this to stop. It’s time to be pitiless against the bankers and against the people who invest in murder to assure their own survival in power. Assets from these states should be frozen, all over the west. Money trails should be followed, wherever they lead. People should go to jail, in every country in the world. It should be done state-to-state. Stop funding the murder of our citizens and you can have your money back. Maybe. If we’re satisfied that you’ll stop doing it. And, it goes without saying, but we’ll say it anyway – not another bullet will be sold to you, let alone advanced warplanes, until this act gets cleaned up to our satisfaction. If that endangers your political position back home, that’s your problem, not ours. You are no longer trusted allies. Complain, and your diplomats will be going home. Complain more loudly, and your diplomats will be investigated and, if necessary, detained. Retaliate, and you do not want to know what will happen, but it will done with cold, reasoned and, yes, pitiless calculation. It will not be a blind punch. You will not see it coming. It will not be an attack on your faith. It will be an attack on how you conduct your business as sovereign states in a world full of sovereign states.

And the still, stately progress of the news from Paris continues. There are arrests today in Brussels, of alleged co-conspirators. The body count has stabilized. New information comes at its own pace, as if out of respect for the dead. In the stillness of the news itself, there is refuge and reason and a kind of wounded, ragged peace, as whatever rolled up from the depths of the sickness of the human heart rolls back again, like the tide and, like the tide, one day will return.

One thought on “Another day, another terror attack”