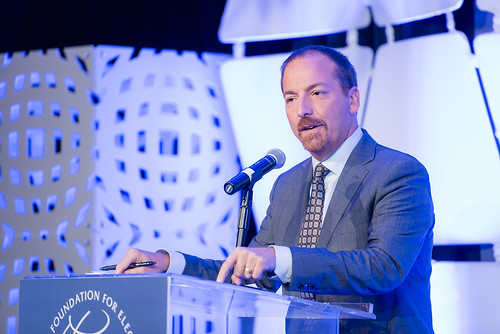 Journalism professor Jay Rosen in response to another one of Chuck Todd’s absurd comments:

It’s hard to know how seriously to take their bewilderment. These are people who live daily with “the partisan divide,” a cliché they helped make into a cliché. But on the chance that they’re being sincere let me be equally straight with them… #

Every time you had to “leave it there” after ideologies clashed mindessly, fruitlessly. Every dubious truth claim you had to let pass because challenging it might interrupt the flow or make you sound too partisan. Every time you defaulted to “will it work?” when the bigger question was “is it so?” Every dutiful effort you made to “get the other side” without asking if the number of sides was really two. Every time you asked each other “what’s the politics of this?” so you could escape the tedium and complexity of public problem-solving. Every time you smiled weakly to say, “depends on who you ask” before launching into a description of public actors who dwell in separate worlds of fact. Every time you described political polarization as symmetrical when it isn’t. Every time you denied that being in the middle was a position so you didn’t have to ask if it was a defensible one. Every time you excluded yourselves from a faltering political class. Every pox you put on both houses because it felt good to float above it all. Every eye you rolled at the humorless scolds who rage at the White House Correspondents dinner. Every time you jeered at the popularity of “partisan media” without reminding yourself “…there goes our audience.” Every time you laughed at the Daily Show’s treatment of you with no companion sense of dread. (They’re on to us.) Every time you said “the truth is probably somewhere in the middle” when you really had no clue. Every time you pointed with pride to the criticism you were getting from both sides, assuming it meant you were doing something right when you might have been doing everything wrong. Every operative you turned into an expert. Every unprincipled winner you admired for their savvy. Every time you thought it was not up to you to judge when it was on you — especially on you — to assess, weigh and, yes, judge.

All of it, every moment like that had the effect of implicating you in this mess.

Look: I am not saying journalists are the ones we should blame for American’s dysfunctional politics. So if that’s how you read me… well, you misread. But I do consider them active participants in the events that got us here. Instead of turning to us to ask, “why can’t you people get along with each other?” they should be trying to pinpoint it for themselves: Where did we go wrong?