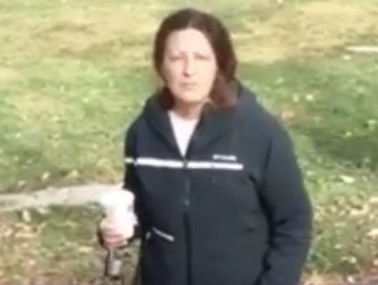 I don’t blame Donald Trump for the fear and bigotry (it was there before he opened his mouth), but he sure as hell seems to have given people mental permission to cross the line and actually attack people:

A woman hurled anti-Islam slurs and then hot coffee at a group of Muslims after she saw them praying in a California park.

Rasheed Albeshari said he and some friends had just finished their prayers Sunday afternoon at Lake Chabot in Alameda County when the woman confronted them, reported Arab American News.

Albeshari recorded cell phone video of the woman’s rant, beginning when she accused the men of being terrorists who tortured Christians.

“The people you tortured, they’re going to spend eternity in heaven,” says the woman, who was carrying a cup of coffee, a folded umbrella and a fanny pack. “You are very deceived by Satan. Your mind has been taken over — brainwashed — and you have nothing but hate, nothing but hate.”

A park ranger approaches at that point and asks the woman if her harangue of other park visitors is appropriate.

“It is inappropriate, you’re right, for somebody to tape record me,” the woman says.

Albeshari says the woman had insulted his god, and at that point she approaches him, hits the man with her umbrella and then tosses coffee in his face.

His friends called police, and they are investigating the case as a possible hate crime.

One thought on “Woman throws hot coffee on praying Muslims”