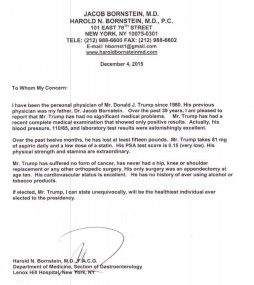 If I had to guess, I’d say Donald Trump wrote this letter and got his doctor to sign it. Whatever — it’s so strange!

Donald Trump’s doctor released a medical report so silly that when we asked the American Medical Association about its language, their spokesman started to laugh.

Donald Trump’s doctor appears to be just as bombastic as he is.

It’s the only conclusion to be drawn from a hilariously bizarre letter that the mogul’s doctor—Harold Bornstein—wrote about his yuuuugely terrific health. And the letter raises as many questions as it answers.

For example, he describes Trump’s recent physical exam as “show only positive results.” While it’s clear he means to say everything was normal, the word “positive” is an odd use of the term in medicine. Rather, it typically means that some result or finding was present—and those findings aren’t always great news (think testing positive for a disease). The wording is clearly chosen more for rhetorical effect than clear medical communication—and that choice left some experts scratching their heads.

3 thoughts on “Donald Trump has excellent health, the best ever!”