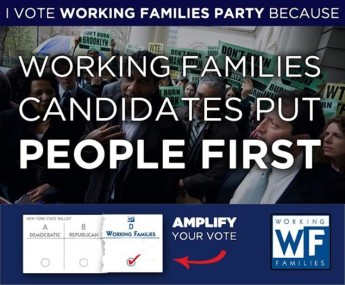 The Atlantic does a HUUUUGE feature on my favorite political party. Not a party per se (they endorse slates) but join your local chapter!

At a recent private dinner in Manhattan, a small group of leftists plotted to take over America.

The group, a dozen community organizers and activists from all over the country, had convened at a sushi restaurant in the Flatiron District with the leaders of the New York-based Working Families Party. They were heads of organizations from Boston to Albuquerque, with names like National People’s Action and Washington Community Action Network. And they were there to hear why their states should form their own chapters of the insurgent party, in order to capitalize on the country’s rising liberal tide and push the national conversation leftward.

The party’s deputy director, Jon Green, a pale, bespectacled 42-year-old, made the pitch. “In 2010, we saw the Tea Party yank the entire political discourse way to the right,” he said. The Tea Party was powerful, he said, because it was boldly ideological; it recruited and groomed candidates; and it created a strong national brand. “Our view is that there isn’t anything analogous to that on the left, and there ought to be.” Heads nodded around the table.

The Working Families Party’s agenda—frankly redistributionist and devoted to social justice—targets a class of Democratic elected officials who, in the view of many liberals, seem to listen more to their moneyed donors than to the left-wing rank and file. Aggressive, tactical, and dedicated to winning, the WFP would like to force Democrats—and the country—to become more liberal by mobilizing the party base, changing the terms of the debate, and taking out centrist incumbents in primaries.

If there’s ever been a moment for this, it is now. Four years after Occupy Wall Street, with the socialist Bernie Sanders pushing Hillary Clinton leftward in the Democratic presidential primaries, liberal frustration with national politics has reached a boiling point. Enter the WFP: Since its founding nearly two decades ago, it’s become an influential fixture of Democratic politics in New York, New Jersey, and Connecticut. Now, the party is going national. By mid-2016, the WFP plans to be in 11 states, with more on the horizon. Last month, the WFP endorsed Sanders after an online vote of its national membership. They may not yet be a household name, but a few years from now, they aim to be a national force.

One thought on “Working Families Party makes the big time”