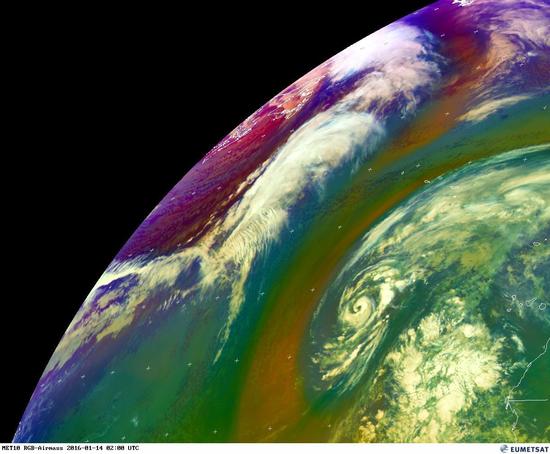 This is weird, right?

Evening satellite imagery indicates that Alex continues to generate
a complex of curved convective bands, and an eye has been trying to
form inside the innermost band. Satellite intensity estimates are
55-65 kt from TAFB and 55 kt from SAB. In addition, recent ASCAT-B
data showed winds of 50 kt about 30 n mi southeast of the center.
Based on these data, the initial intensity is increased to 50 kt,
and this could be a little conservative. Even though Alex has
strengthened, the system is still underneath an upper-level trough,
and it has not yet developed the upper-level outflow characteristic
of a tropical cyclone.

Alex has continued to turn toward the left and the initial motion
is now 035/15. The cyclone is expected to turn northward during
the next 12-24 hours due to the influence of a large extratropical
low over the northwestern Atlantic. Alex is expected to turn more
northwestward on the northeast side of this low after 48 hours,
with this motion continuing until the two system merge between
72-96 hours. The new forecast track is very similar to the
previous track, and it calls for Alex to pass near or over the
Azores in about 36 hours.