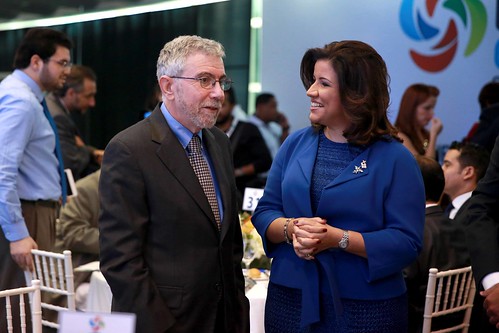 Krugman makes an excellent point here: that Obama only got so much done by accepting incremental change.

And the question Sanders supporters should ask is, When has their theory of change ever worked? Even F.D.R., who rode the depths of the Great Depression to a huge majority, had to be politically pragmatic, working not just with special interest groups but also with Southern racists.

Remember, too, that the institutions F.D.R. created were add-ons, not replacements: Social Security didn’t replace private pensions, unlike the Sanders proposal to replace private health insurance with single-payer. Oh, and Social Security originally covered only half the work force, and as a result largely excluded African-Americans.

Just to be clear: I’m not saying that someone like Mr. Sanders is unelectable, although Republican operatives would evidently rather face him than Mrs. Clinton — they know that his current polling is meaningless, because he has never yet faced their attack machine. But even if he was to become president, he would end up facing the same harsh realities that constrained Mr. Obama.

The point is that while idealism is fine and essential — you have to dream of a better world — it’s not a virtue unless it goes along with hardheaded realism about the means that might achieve your ends. That’s true even when, like F.D.R., you ride a political tidal wave into office. It’s even more true for a modern Democrat, who will be lucky if his or her party controls even one house of Congress at any point this decade.

Sorry, but there’s nothing noble about seeing your values defeated because you preferred happy dreams to hard thinking about means and ends. Don’t let idealism veer into destructive self-indulgence.

8 thoughts on “How change happens”