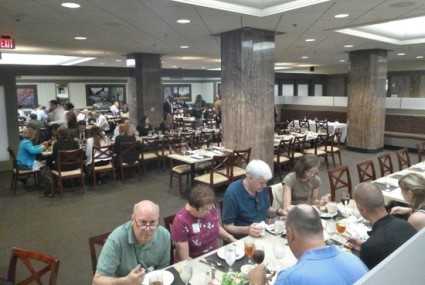 In this story about what a Republican in the White House does to workers:

One privatization story that literally “hits home” is the story of the people who work in the home of our federal government, the U.S. Capitol. In 2008 the U.S. Senate “saved money” by privatizing its food services. Democratic Sen. Dianne Feinstein said at the time, “There are parts of government that can be run like a business and should be run like businesses.”

So a private corporation was hired, and the existing workers were laid off and replaced (sometimes by the same people) with low-wage, few-benefit workers. That’s what happens when you “run government like a business” because businesses do everything they can to “save money” by paying as little as they can and providing the minimum of services they can. Senate food workers had to try to find second and third jobs, just to get by. Some Senate cafeteria workers are homeless even though they have “jobs.”

After some time of trying to get by on wages that don’t enable people to get by, the new workers decided to start trying to improve their situation. They began trying to organize, engaged in walkouts, tried to get some publicity, filing labor complaints, and eventually won a raise … except it turns out that “being run like a business” meant the business would find ways around meeting their commitments.

Susan Madrak at Blue Nation Review begins the story, in “How A Republican In The White House Will Hurt Workers Like These“:

The Senate food service (which ranges from the formal Senate dining room to the Senate cafeteria and several coffee shops) was privatized in 2008, and lower wages and benefits soon followed.

It got so bad that last year, the workers staged a series of strikes. As you might expect, they attracted a lot of media coverage, and many senators on both sides of the aisle publicly supported the cause. [Including many of the same senators who first perpetuated the idea that all government services should turn a profit, but that’s another story.]

… The legislative agency that handles procurement contracts at the Capitol finally got the company that runs the cafeteria to agree to a new contract giving employees a decent wage. Some workers would see a $5 bump.

Guess what the employer did next.

One thought on “I got quoted”