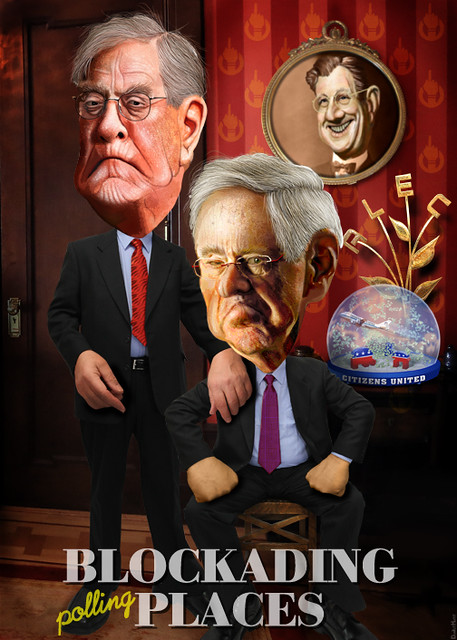 Go read the rest of this Rolling Stone interview with Jane Meyer, author of Dark Money, a look at the Kochs’ influence on our nation:

You write that the Koch brothers have “used their fortune to impose their minority views on the majority.” What have they accomplished in that respect?

One of their greatest accomplishments is in funding complete confusion on the subject of global warming in America. You can trace something like $25 million from the Koch family and their foundations, just over a three-year period, to organizations that deny the reality of global warming. And you can see that they’ve managed to change public opinion on the subject. Americans have gotten less certain on this issue, as the rest of the world has been going in the opposite direction. And you can see that our Congress has been captured by their interests and those of the fossil-fuel companies, so it will do nothing about global warming.

What are some other examples of how American society looks different today because of the Kochs’ influence?

This has been a 40-year project that Charles and David Koch have been funding with their vast fortunes to try to change the way Americans think. Another of their greatest accomplishments is in turning Americans against the idea of government being a force for good. It’s not they alone who have done this, but they’ve pushed very hard on it, and public-opinion polls show that Americans’ regard for government has just plummeted in recent years.

They’ve also succeeded in many ways in pushing through lawsuits that their donor group has funded. They’ve succeeded in gutting campaign finance laws, so many of the problems we now see in terms of unlimited spending were stirred in the first place by organizations that they’ve helped fund.

Speaking of unlimited funding, let’s talk about Citizens United. Both Hillary Clinton and Bernie Sanders have said that they would use overturning Citizens United as a litmus test for Supreme Court nominees, and even Jeb Bush has criticized the decision. What’s so bad about it? What has it wrought?

What Citizens United has done is equate spending money with free speech without limits. What people originally thought it would do is flood the system with corporate money, but in fact something quite different has happened: It’s flooded our system with unlimited money from individual tycoons, who all have very strong opinions.

And by the way, it’s not just Citizens United, there’s a second case, SpeechNow, that was almost entirely cooked up by the Kochs and their allies, that lifted the limit on individual spending.

What’s happened is even more pernicious, in a way, than just unlimited spending. What’s happened is that “dark money” — that is, contributions from undisclosed donors — has exploded. Once individuals and companies and nonprofit corporations could spend as much as they wanted, a new form of spending exploded: spending by groups that claimed to be nonprofit, nonpolitical organizations. They’re called 501(c)(4)s, and they don’t disclose where their money is coming from. In 2006, only two percent of outside political spending came from these dark-money groups — which call themselves social-welfare groups. After 2010, it rose to 40 percent. Almost all of that money was spending on the right. So you’re getting a flood of undisclosed spending by right-wing billionaires and multimillionaires, basically. It’s creating distortions in American politics and American life.

Many studies have shown that the priorities of the super, super rich are really very different from those of the rest of the country. Ninety percent of Americans think Citizens United was a bad idea and that there’s too much money in American politics. But of course the big spenders see it differently, and they’re the ones who are dominating. Majorities of Americans now think that climate change is real, and that mankind is causing it, and something needs to be done about it. But, again, the big private interests have captured the government on that issue, and nothing’s getting done about it. Huge majorities of Americans in both parties want to see Social Security not weakened but strengthened. The very, very rich want to privatize it; they want to shred it. They don’t want to pay for it. They don’t need it.

On issue after issue, the super-rich have become, because of Citizens United and the other court cases associated with it, possibly the most powerful private interest group in America today.