Vanity Fair is reporting that the FBI raided Michael Cohen's hotel room at the Loews Regency in New York.

"A handful of them remained upstairs for several hours, according to a source familiar with the situation."https://t.co/nWEW0fFNUN

JUST IN: President Trump has been watching TV reports of the FBI raiding the office of Michael Cohen, his longtime lawyer and confidant, a White House official tells @jeffzeleny https://t.co/flG4uDokat pic.twitter.com/TPwNYy3JRe

Fox now blaming news of the FBI raid on Michael Cohen's office for "almost 400 points erased from what was a magnificent rally" in the stock market. pic.twitter.com/XpZtxbMMAO

This doesn’t mean Mueller never found anything of interest, by the way. It just means Rosenstein thought this was something the NY feds should handle. Getting a warrant to seize a lawyer’s records is highly unusual and indicates they have proof of crimes.

And of course it means these are crimes Trump can’t pardon. 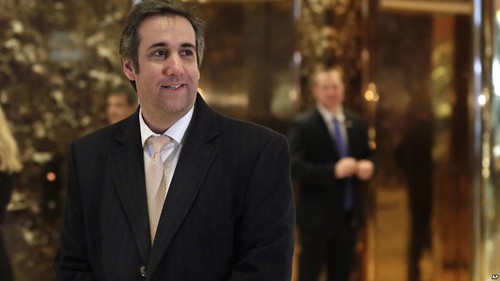