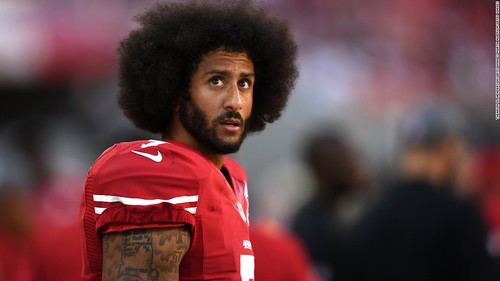 Of course, the word I want to use isn’t “weinies”:

NFL owners all but agreed they were blackballing Colin Kaepernick to appease President Donald Trump, according to newly released audio recordings.

About 30 owners, players and NFL executives met for nearly three hours in October to discuss the president’s public attacks on the league and its players over silent racism protests during the national anthem, reported the New York Times.
………………………..
According to the leaked audio, players wanted to know why Kaepernick remained unsigned, despite leading the San Francisco 49ers to the 2013 Super Bowl and 2014 NFC Championship game.

“If he was on a roster right now, all this negativeness and divisiveness could be turned into a positive,” said Philadelphia Eagles defensive lineman Chris Long at the meeting, adding that he wouldn’t “lecture” teams on which quarterback to sign. “We all agree in this room as players that he should be on a roster.”

“The problem we have is, we have a president who will use that as fodder to do his mission that I don’t feel is in the best interests of America,” Kraft said. “It’s divisive and it’s horrible.”

One thought on “Buncha weinies”