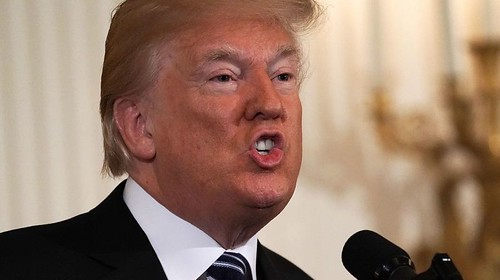 Go read the entire Salon interview Chauncy DeVega did with a psychologist:

Donald Trump’s presidency remains a global crisis and a national disaster, yet many Americans have quickly adjusted to the situation. I don’t just mean the millions of Trump supporters who are cheering on his assault on democracy and the country’s prestige and well-being. Is this learned helplessness or cowardice? How do you explain the relative non-response to Trumpism?

Part of the reason many people do this is because it really is psychologically overwhelming. It’s just almost too frightening to consider that a madman has control of the nuclear button, and he truly doesn’t care if he destroys us all. In fact, there’s a part of Trump that would almost take glee in it. He’s impulsive, he’s erratic, he’s seeing the world in a grossly distorted way. He’s only concerned with how things impact his own thriving and survival. Trump does not care about the well-being of literally anyone but himself. It really is a kind of dystopian nightmare.

You and I have closely followed Trump’s rise to power and tried to communicate the depth of this disaster to the public. You have written or edited several books on this moment. I am trying to get my Trump book project finished as well. Are there moments when you feel like ignorance is bliss?

I do find myself feeling like, “Dear God, why can these people not see it? And what can we do to open their eyes?” It is like a 1950s or 1960s horror movie where nobody would believe that there was actually a monster that’s about to destroy the town and there are these Cassandra-like figures trying to warn people. But the townspeople remain in denial and they are doomed.

Trump’s political movement meets the criteria for a political cult. You are a psychiatrist. Is it possible to reach someone who is stuck in Trump’s cult? Why does he have such influence over these people?

It does meet the criteria. You’ve got the charismatic leader, and his followers subsume their identity into his group, which makes them feel larger and more powerful. Once you have that kind of blind belief and loyalty, the leader, as Donald Trump has said, could really shoot someone on Fifth Avenue and nothing would happen. The cognitive dissonance is such that the cult members will rationalize anything. For example, something like 50 percent of Republicans say that if Trump wanted to cancel the 2020 election, that would be fine with them.

He is actually the second most popular Republican president in the history of modern polling.

This is what I have described as a “malignant reality.” Trump, the Republican Party, and their supporters’ sadism is a key part of it.

The sadism is very important. When I first started talking about Trump as a malignant narcissist, people could see the narcissism, the paranoia and the antisocial element. But the fourth component of malignant narcissism is sadism. You see it in everything he does, from the separating of the children at the border to how Trump tortures anyone who doesn’t give him what he wants. There’s a way in which he takes a kind of manic glee in causing harm and pain and humiliation to other people.

One thought on “Trump hasn’t hit bottom yet”