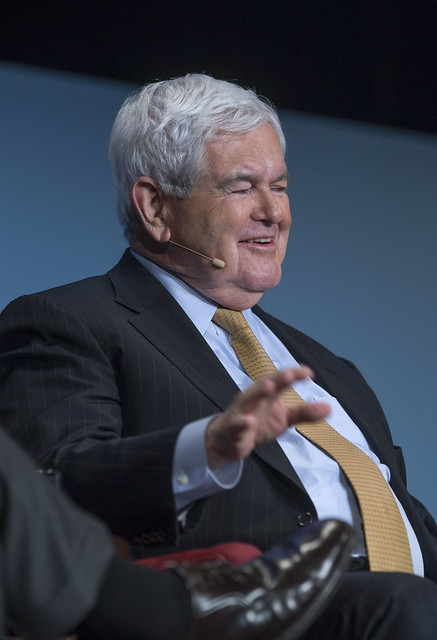 This fucking weasel. Via Mediaite:

Newt Gingrich just admitted that President Donald Trump has a tendency to muddle the details a bit, telling ABC’s Powerhouse Politics on Wednesday that Trump “often says things you can catch him on.” He also expressed some doubt that POTUS will change any time soon.

“They both have a tendency to say general directions that are powerful with details that are dubious,” Gingrich told hosts Jonathan Karl and Rick Klein, comparing his truth-stretching to former Republican Ronald Reagan’s. He added, though, “I’m less sanguine than I was year ago that [Trump] is going to change because he basically emphasizes his strengths and ignores his weaknesses rather than trying to fix [them].”

Then later in the interview that hit on space, the future of the GOP and of course the midterms, Gingrich noted that Trump’s “impact in the Republican party is astonishing,” and stressed that Trump was not essentially a conservative at all.

“Trump is not essentially a conservative. Trump is an anti-liberal. They’re not the same phenomenon. But he may be the most effective uprooter of liberalism in my lifetime,” Gingrich told the ABC hosts, before moving to other topics, including the praise of Vice President Mike Pence for chairing the National Space Council.

One thought on “Newt’s doing the happy dance”